With a full scaffolding platform in place in the Library the conservators can now get right up to the ceiling. This allows close examination of elements which have only previously been seen through binoculars or telephoto lenses.

The first thing that is obvious – even more apparent than it is from ground level – is how the plaster has twisted out of shape over the years. The two longer sides are both very distorted, but the conservators have tested the plasterwork and say that it is secure and in no danger of falling, which is very good news. 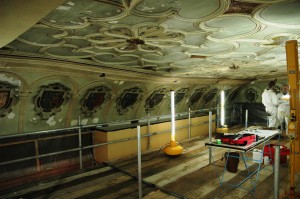 The coving over where the east wall meets the ceiling shows considerable distortion. 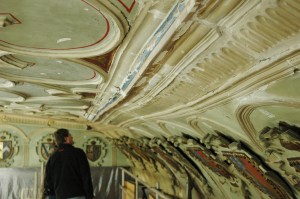 If anything the coving on the west is more deformed, but the plaster is secure both in its fixings and in itself

The wood effect around the coats of arms was not painted onto the plaster, as first thought, but was printed paper. This presumably dates from early in Queen Victoria’s reign. We do not know whether it was printed especially for this application or was a commercially-available product. 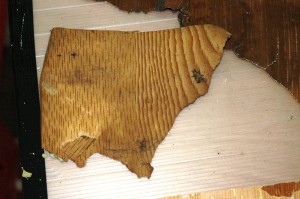 Printed ‘wallpaper’ may have been bought in as is.

On the upper edges of the coving, close to the ceiling, there are a number of curious devices, individually placed and with no apparent relationship to each other. These are the crests of neighbouring Cheshire families, in each case taken out of context from the relevant coat of arms. Viscount Combermere was presumably associating himself with the other grandees of west Cheshire, especially those who were far grander and had held titles for much longer. 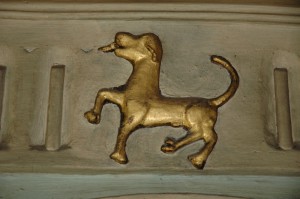 The hound with his tongue sticking out is the crest of the Grosvenor family; now the massively wealthy Dukes of Westminster. Their place in the aristocracy dates back to 1622 when Richard Grosvenor was created baronet. The line became earls in 1784, marquesses in 1831, and dukes in 1874 – so at the time of Viscount Combermere’s inserting their crest into his ceiling, the head of the house was the Marquess of Westminster (he was also Earl Grosvenor, Viscount Belgrave, Baron Grosvenor, so he stood well ahead of Combermere in the order of precedence.

The dog on the crest is a talbot, a breed of scent hound used for medieval hunting. The talbot has now died out – though the beagle and the bloodhound are descended from it. It was usually white and had large ears, and it is the crest of the Earls of Shrewsbury as well as the Dukes of Westminster (as well as other families – and the town of Sudbury in Suffolk.  In heraldry it is always shown with its tongue protruding, often lolling out of its mouth to its left side. The Talbot is a common name for a pub. 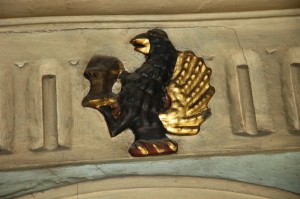 The griffin holding a knight’s helmet is the crest of the Marquess of Cholmondeley, whose northern seat, Cholmondeley Castle, is only a short distance from Combermere Abbey. Robert Cholmondeley was created viscount in 1661, his grandson – Hugh – was made an Earl in 1706, and they were created marquesses in 1815. The current Marquess, the seventh, is Lord Great Chamberlain of England. He became Knight Commander of the Royal Victorian Order in 2007. 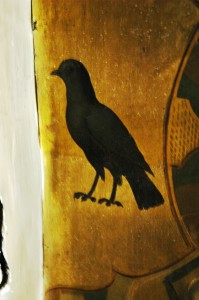 Unlike the other crests, which are plaster mouldings, this bird has been painted directly on to the surface of the coving. Unsure of what we had here I asked for help from Martin Goldstraw, an expert in Cheshire heraldry. He says; “I can see that it is basically a bird that is black in colour upon a gold shield. The fifth quarter of the arms of Brereton of Brereton are those of Corbet. The arms of Corbet are Or, two ravens Sable (a gold shield upon which are two corbies or ravens black in colour). The basic arms of Corbet are Or, a (single) raven Sable”. That is fascinating on several counts. We know of connections between the Cottons and the Corbets, and the famous ghost photo of the second Viscount Combermere, taken during his funeral, was the work of Sybil Corbet, a close family friend. 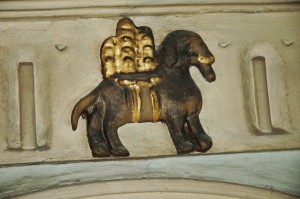 This is an elephant and castle crest. This has many associations in England; it is the emblem of The Worshipful Company of Cutlers, it appears on the shield of arms of Coventry City Council, and the phrase is often thought to refer to Queen Eleanor, being a corruption of Infanta de Castille. Not far from Combermere, at Peckforton, there is a large stone carving of an elephant and Castle in front of a cottage. That dates from 1859 and is Grade II listed, but this crest bears no relation to Peckforton (or its then owner, Baron Tollemache). Once again it is a link to the Cortbet family of Shropshire. As Martin Goldstraw explains;  “The Corbet arms explain the connection with the elephant and castle as the Corbet crest is An elephant Argent, on his back a castle triple towered Or, trappings of the last and Sable.” 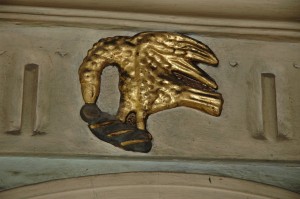 The eagle and child is the crest of the Stanley family; the Earls of Derby. The title was first granted to Robert Ferrers in 1139. The sixth Earl forfeited his property toward the end of the reign of Henry III and died in 1279. The title  was created again for the Stanley family in 1485, so it is a very ancient peerage. The seat of the Earls of Derby is at Knowsley in south Lancashire (now Merseyside); a few miles the other side of the River Mersey. The current Earl Derby is the nineteenth. 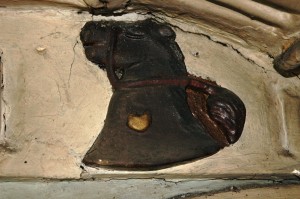 We first thought that this plaque is of a horse’s head, with reins, and the crescent probably indicates cadency (a younger branch of the family) – though a crescent can either note someone who has been honoured by their monarch, or they may date from the Crusades. Thankfully Martin Goldstraw could identify the animal better than we could; ” I would lay odds on your horse’s head being the bear’s head crest of Brereton of Ashley. It is their crest, a bear’s head erased Sable, muzzled Gules, a crescent for cadency or the crest of Brereton of Malpass.  The arms of Brereton of Malpas  do not have a crescent for cadency on the crest itself however the arms themselves do feature a crescent for the second son. ” Brereton is an ancient and distinguished Cheshire surname. Breretons have been gentry in various parts the county for centuries; Sir William Brereton was a Parliamentary commander during the English Civil War and he commanded the garrison at Nantwich through the Royalist siege of 1643.  Brereton Hall is a Grade I listed country house in east Cheshire dating from 1586. 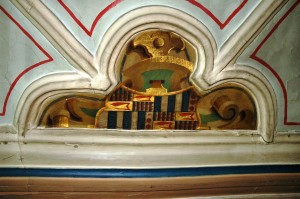 The half quatrefoil  panels are filled with rather obscure images painted on to shaped pieces of paper. The images may become easier to understand once they have been cleaned. 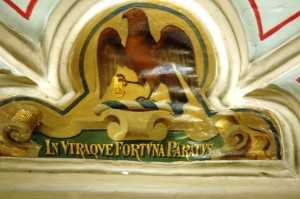 This one, showing the Cotton crest and motto (“In Vitraque Foruna Paratos”) has been repaired. It seems that a new piece of paper has been rather roughly cut out and pasted over the original. The joins are very apparent up close. 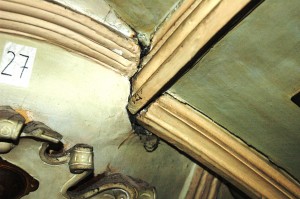 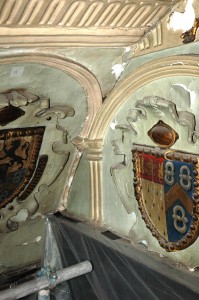 The original workmanship in the corners of the plaster coving is dreadful. A fairly complex chamfer is needed, but this seems to have been beyond the skill of the builders. These junctions are very awkward, and it is hard to understand why corrections were not demanded. 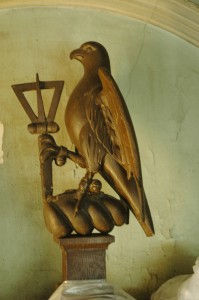 At the south end of the Library a wood carving of the Cotton crest of a falcon stands on a metal plinth. Its left claw rests on a torse, while the right is holding what may be a belt and buckle. This device appears appears elsewhere in slightly different form. There is nothing similar elsewhere on the Cotton or Combermere arms. 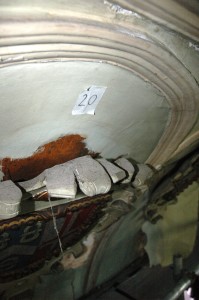 The shields are secured through the plaster to the beams by two bolts, one either side, two thirds of the way up each shield. The head of the bolt has then been covered in plaster in each case, which is moulded into a vertical piece. In several places there has been movement and the plaster moulding has cracked horizontally below the bolt head. Securing the nuts on the other end of the each bolt, deep in the roof space, must have a difficult task.

The wood-effect printed paper behind each coat of arms can be seen in the photograph above, with the bolts loosened off. This paper has been painted over at some point. Perhaps the brown of the wood-effect was too dark and didn’t allow the shields to be seen to their best advantage. 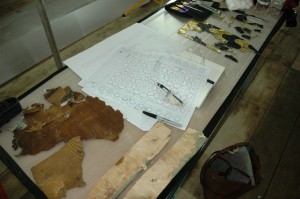 The conservators’ workbench, with their plan of the ceiling mouldings, and gold leaf taken from the ceiling. The first phase of the conservation work will take some five or six weeks. There will then be a two week drying-out gap before final work resumes.