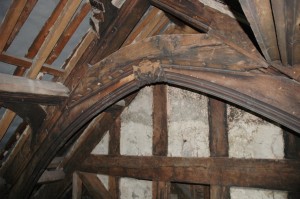 The north end of the roof space, showing what seem to be early Tudor carved beams.

Being in the roof space above The Library at Combermere Abbey is a truly awe-inspiring experience. Everything you can see and touch has it own place in the history of this ancient building, and up here – where few humans have ever been – you are surrounded by very immediate evidence of hundreds of years of that history.

The Library has long been the most important room in the house. It is today, and it was previously The Abbot’s Lodging – the impressive and luxurious centre of the pre-Dissolution Abbey. A dendrochronology survey is mooted in the near future, and indeed only those results will really explain what we can see below the roof and above the Library ceiling. We know that the room was re-built in the reign of Henry VII, and may well have been altered by builders working for the Cotton family after the Dissolution.  We do not know if the roof was re-built on either occasion.

The arched beams at either end have been carved on their lower edges, and were obviously intended to be seen, so this must be the monastic open roof. There is carved foliage at each apex, where the curved sections meet, but in each case this has been sawn off (slightly roughly, but definitely not knocked off), and the reason for this is unclear. It may have been cut away for clearance when other timbers were inserted. None of the oak securing pegs, once pushed into place, have been cut off on either face of the main timbers, which is surprising, given that this was to be seen from below.

At the northern end there is a simple timber frame with infilling, and one lower panel in the centre has been left open, as if for access. It gives access to an area just a couple of feet in depth, and it is hard to say why there is this partition. It is in this section that there is definite evidence of a large baldacchino; a canopy which would have been draped with fabric on the two sides and perhaps the rear, indicated his status and keeping bat and bird droppings off his table.

In a number of places there is evidence of repair. This patching has been done very          crudely. Plaster has been daubed over a timber repair on the upper-most one.

The plaster ceiling in The Library was built towards the end of the Seventeenth century, and lathes will have been put in place under the main timbers at the point, from which to hang it – beneath new, curved, full-width beams.  There are much smaller, secondary beams to either side of these main cross-beams, which appear to be of a different timber. These look like latter additions, though it is unlikely that they were for extra support; perhaps they were installed to give a greater face area for the ceiling to be pinned to.  There are iron supporting staples throughout. These are hand-made and as there are no other signs of fixings or fixing holes, it is reasonable to assume that these are contemporaneous with the beams and lathes. There are also some iron straps supporting lengths of the older, arched beams, where cracks have appeared. 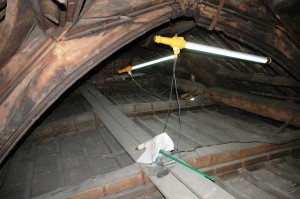 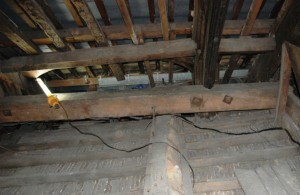 On the western side of the roof space a large timber has been introduced at some point, doubtless as a repair, to add support. It has been bolted to the (presumably) Tudor timbers where it crosses them. The older beams have been cut into to horizontally (and possibly vertically, to a smaller degree) to accommodate the later beam. Access to this timber is currently difficult, but it is about eighteen inches square, by more than thirty feet long.  This means it would weigh about four tonnes. How this was put in place, more than thirty feet from the ground, and with the earlier beams still in position, is hard to imagine. It could not have been introduced from either the north or the south, given that there are gables at both ends. As it sits on the later transverse beams it looks like a later repair, so it is unlikely that it was raised from within The Library (even then, getting it into the building would seem impossible).  The beam is straight and true, which could suggest that it is relatively modern; a dendrochronology date would be fascinating. No matter what its date, raising it and bringing it into place would have been a massive and very difficult undertaking.

On the eastern side of the roof space, running the full length, is a what looks like a two inch square beam – which at first glance seems odd. It is in fact the fully-boxed cable ducting, dating from when electricity was first introduced into the house in the mid-Twentieth century.

There have been some recent finds of detritus in the roof space; a bottle which at first glance looks to be early Victorian, several hand-made staples and nails, a small piece of light brown pottery (part of the rim of a drinking vessel or a jar), and a definitely Twentieth century (empty) packet of Woodbine cigarettes. 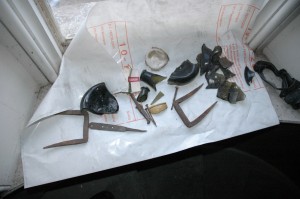 Finds from the roof space. It is horrifying to think that at some point (possibly when electricity was introduced to the Abbey) workmen have been smoking up there!