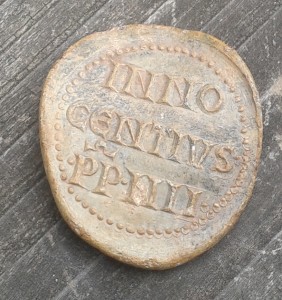 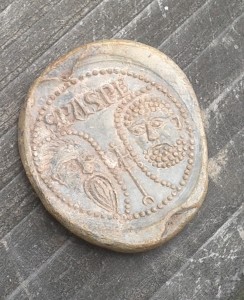 This isn’t a new discovery at the Abbey – it was found some years ago by a member of the Crewe and Nantwich Metal Detecting Club – and it isn’t even unique; another, similar, was discovered a few years earlier. It is utterly fascinating though, and it is testament to the Abbey’s monastic role in the Middle Ages. It is made of lead, impressed on both sides, and is the seal from a papal bull.

From the Sixth century onwards popes communicated with religious houses such as monasteries and cathedrals by documents which expressed the papal will. Copies were sent all over the Christian world, and a copy was retained for reference in the papal chancery – the registrum bullarum, or register of bulls. Unfortunately for the papacy the ungodly tended to forge these bulls, and in 1048 Pope Leo IX formalised the bulls. About a hundred years later the papal seal was introduced.

The seal shows Saints Peter and Paul on one side and the issuing pope’s name on the other. These were originally attached to bulls written on papyrus, but that was superseded by parchment. All bulls began with one line in tall, elongated letters containing the Pope’s name, and the Papal title episcopus servus servorum Dei, meaning ‘bishop, servant of the servants of God’. For the most important bulls the Pope would sign the document himself, in which case he used the formula Ego N. Catholicae Ecclesiae Episcopus (I, N., Bishop of the Catholic Church). Following the signature in this case would be the pope’s monogram and the signatures of any witnesses, and then the seal. 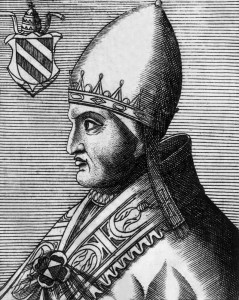 The bull to which this bull was attached was issued by Pope Innocent IV – Sinibaldo di Fieschi of Genoa. He was pope from June 25 1243, and died on December 7 1254, so the seal must date from that eleven year period in the mid-Thirteen century – during the long reign in England of King Henry III. Born into a wealthy merchant family, he rose rapidly through the church in Italy before being unanimously elected pope. As pope he saw himself as the Vice-regent of the Almighty, whose power was above earthly kings. Innocent, therefore, had no objection to intervening in purely secular matters, indeed he tried, without success, to convert – or at least civilised – the Mongols. He deposed the King of Portugal and tried to unseat the King of Sicily.

Most seals, like the two found at Combermere, were made of lead, but on rare occasions they could be gold (how sad that ours isn’t). This disc was attached to the document either by cords of hemp (in the case of letters of justice, and executory) or by red and yellow silk (in the case of letters of grace) that was looped through slits in the vellum of the document. Bulla is the name of this seal, because whether of wax, lead, or gold, the material making the seal had to be melted to soften it and take on an impression: Latin bullire, ‘to boil’. 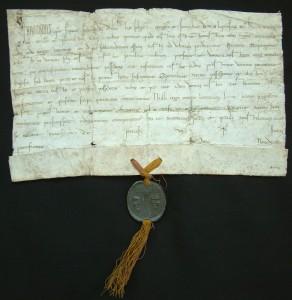 A papal bull with its seal in place, attached by a hemp tassle 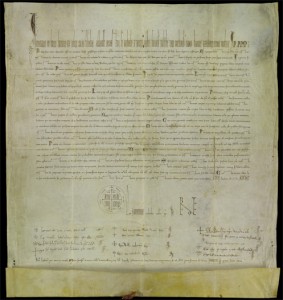 A papal bull issued by Innocent IV in 1245 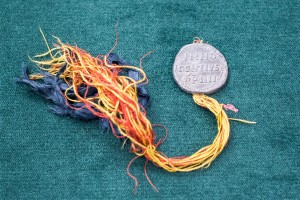 A bull seal with its silk tassels still attached

Bulls seals are not particularly rare – indeed a small number survive from the very earliest, fourteen hundred year-old bulls. That isn’t surprising; these were very important documents and they would have been stored safely. It is possible that the Combermere Abbey seals were disturbed during the Dissolution in the 1530s. Monastic property, particularly anything which had the stench of papacy about it, was treated with contempt. The bulls might have been burned or trampled underfoot, so that the documents have perished but the seals survive.