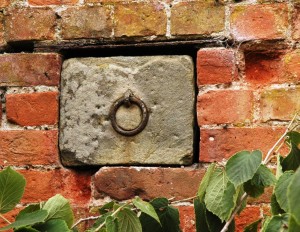 I wonder how many visitors to the Garden Open Days at Combermere Abbey – or guests at weddings held at the Abbey, wandering in the gardens with a glass of bubbly in their hands – notice these stone blocks set into the Victorian brick wall, with iron rings set into them. They go along the north-facing wall in the top garden, at intervals, facing the wedding pavilion.

You might think they are cubes, as deep as they are high and wide, but that is not the case. They are only a few inches in depth and can be pulled out relatively easy. One clue to their purpose lies on the other side of the wall. 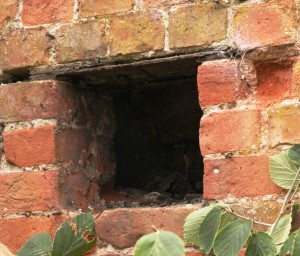 If you walk round and take a look you will see faded whitewash on the south-facing wall of the lower garden (below). This shows that it was once an internal wall, and indeed, a hundred years ago and more this was the inside wall of one of the large glasshouses, which would have stretched to the east and west on either side of the central walk. 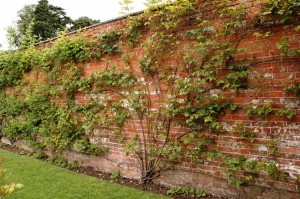 It is in fact a cavity wall, and it provided central heating for the glasshouses. During the colder months burning straw was pushed into the cavity through the apertures and the stones were then replaced. Straw burns for a long time, and the clay bricks would have retained the heat very well. As you might expect, the fires were lit in autumn and spring, and cheap labour meant that there was always a junior gardener on hand to stoke the fires. The wall would have been hot to the touch if the fires were kept well maintained.

From 1800 onwards, in parallel with the growth of the British Empire, fruit-growing in particular became hugely popular in Britain as thrilling new varieties were brought back from exotic corners of the world.  There was no thought that these fruits could not be cultivated in Britain; that is not the way that the British mind worked in Georgian and Victorian times. The question was simply how to create the conditions in which they would flourish. 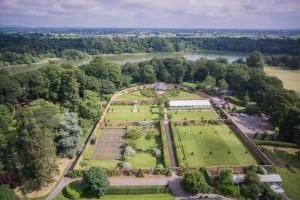 The Walled Gardens at Combermere Abbey, seen from the air – and from the south. The long white building is the wedding pavilion, and the heated wall is behind it, and across the central walk to the left. Glasshouses stretched right across here in Victorian times, providing a huge range of fruit and vegetables for the Abbey’s dining tables.

Between 1800 and 1914 there was a massive increase in interest in both gardening for its own sake, and amateur horticulture, in Great Britain. Improved specialist communication (huge numbers of gardening books were published) and faster transport – both from the far corners of the Empire and within Britain – certainly helped.

Gardens were originally walled to keep predators out, though the protection offered from high winds was also a great advantage (unless a mini-tornado effect was created; gardening books advised on how to avoid that). As they came to include expensive and exotic plants the greater level of security was appreciated too. Some walled gardens were purely designed for the growing of fruit and vegetables, and others for flowers and shrubs. On occasion, of course, a walled garden would include both the aesthetic and the appetising, but they were always kept separate – and required different skills from the gardener.

By 1853 Queen Victoria had established a walled garden at Windsor Castle, which stretched over the massive area of thirty two acres (so the Centre Court at Wimbledon would have gone into the garden no fewer than 542 times). The smallest walled gardens were said to be as little as twenty feet across, though many were eighty feet or more.

The Victorian gardeners were very clever at utilising all the different faces within the walled garden. Plants which thrived in cooler environments, such as species of berries, and cherries, were planted against north-facing walls; apples and pears prefer hardier conditions and were planted to face east; figs, plums and some other varieties of apple and pear faced west; and the more fickle and exotic fruits, such as tomatoes, peaches, plums, apricots, nectarines and cherries had the – ahem – plum position of facing south (hence the expression, doubtless).

The artificial control of horticulture leaped forward in the middle of the Nineteenth century thanks to a number of apparently unrelated occurrences – mainly in taxation and innovations in heating technology. In 1845 the tax on glass was abolished, which of course made it cheaper. The window tax – payable on any property with more than six windows – was abolished in 1848, which meant that there was more demand for glass, and Victorian commerce responded enthusiastically.

In 1851 the great Joseph Paxton’s brilliant design for the all-glass pavilion at The Royal Exhibition demonstrated the possibilities of glass in a steel frame, and was the inspiration for tens of thousands of more modest imitations. Glasshouses, orangeries, greenhouses, and many kinds of similar but even more specialised buildings became readily available and hugely popular. They proliferated in the gardens of middle-class suburban villas, but no great house was deemed complete without its own – and were often vast and extravagant – examples.

The second factor in the growth of popularity of plant-growing rooms was new and more efficient heaters, and the development of heating systems designed specifically for the purpose. Solid-fuel boilers which heated water, which was forced under pressure along convecting pipes, became cheaper, and were simple of operate. They were rather more sophisticated that building fires within the walls cavity.

Not only could hosts and hostesses offer their guests exciting and exotic fruits at the dining table, but they were available for much longer, as were native varieties. Even moderately wealthy Victorian households could place grapes, citrus fruits and a wide range of berries on their tables for several months of the year.

As more and more men were employed as gardeners by the great country houses (and more women were employed in the preparation of their produce in the kitchens), the profession of gardener became more skilled, more highly regarded, and better paid. In the second half of the Nineteenth century there were three very well paid and high status jobs in big houses; Butler (or Head Butler), Housekeeper and Head Gardener. Each was paid over £100,000 a year in modern terms, was well housed and fed, and had generous accommodation. It was a matter of honour among guests to the house that they left generous tips, and after a sociable weekend a considerable sum of money might be divided – according to status, of course.

Someone in one of these three positions often retired relatively early – often to the seaside or inland resorts such as Windermere – and was comfortably off for the rest of hir or her life. As we saw when looking at Combermere Abbey’s Glass House (click here for that feature), the passion for gardening was a great stimulus for British industry, which in turn offered an ever-greater range of products, at every level of the market, thus greatly increasing demand; oiling the ever-turning capitalist wheel. 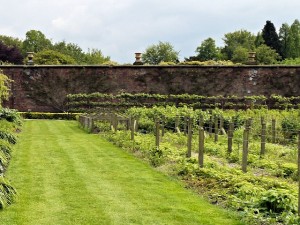 There is a heated garden wall at Tatton Park in north east Cheshire too, and the chimneys are cunningly disguised at classical urns. clever.