It is not hard to imagine that peace and prosperity came to Combermere Abbey under the custodianship of the Cotton family, as England grew steadily wealthier under the long reign of Elizabeth I and on to the Stuart kings. We know of their births, marriages and deaths, and it seems that the family prospered quietly. Religious emphasis came and went across the land, but there were few foreign wars and little in the way of internal conflict. Everything changed about a century after the Cottons came to Combermere though, as the terrible maelstrom of the English Civil War swept across the country.

As war became inevitable the gentry of Shropshire declared strongly for the King’s cause, and in Bunbury in south-west Cheshire, close to Combermere, the gentlemen of the county met to declare the county neutral. It’s likely that the Cottons of Combermere were involved in the pact. Skirmishes had broken out between supporters of the two sides but the gentry could see the folly of it. They agreed that all property seized so far would be returned and all external armies would be escorted out of the county. It was forlorn optimism. The generals of both the Royalist and Parliamentary armies ignored the Cheshire gentlemen and the tidal wave of war roared across the countryside.

There were substantial battles to both the north and the south of Combermere. At Nantwich in January 1644, the last stronghold of Royalism in Cheshire was crushed; the opposing armies numbered at least 12,000 men. There were long and terrible sieges at both Beeston and Chester castles, and at the Battle of Rowton Moor, south of Chester, six hundred men lost their lives in August 1645.

Shropshire was still held for the King though, with the town of Wem being the only Parliamentary bastion in the county. Prince Rupert, Charles I’s nephew, arrived in north Shropshire in 1644 and consolidated the Royalist position, but in the eighteen months after the defeat of the King’s forces at Rowton Moor, the Roundheads took Shropshire.

Thanks to recent research we now know a lot about the Cotton family and the role of Combermere during the Civil War, and you can read that history by clicking here. We also know that in 1690, thirty years after the Restoration of the Monarchy, the Abbey was in good enough shape – and the family in good enough royal favour – for King William III to stay at Combermere Abbey on his way to Ireland to confront the deposed King James II at what became the Battle of the Boyne. The room in which the King is thought to have slept is immediately north of the Library, next to the area of  the North Wing restoration plan. The full story of King William’s stay can be found by clicking on this link. 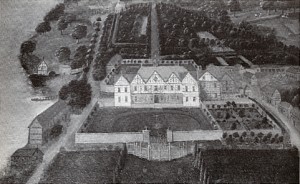 The 1730 painting of the Abbey (which is still in the house), showing the fashionable formal gardens around the still-old-fashioned building

A drawing and a painting of the Abbey, dating from 1727 and 1730  show the building much as it was re-built after the Reformation; mostly half-timbered, and with a tall cupola on the roof above the Abbot’s Lodging – which would have been a delightful look-out, and a vantage point for watching a hunt.

There was still some of the monastic stone-work in evidence, and when he visited in 1774, Doctor Johnson noted that the house was built of several different materials – including plaster painted to look like timber – though he did think it to be the best of that kind that he had seen. If little had been done to the house, then a huge amount of effort had gone into the gardens and grounds. There was a large walled garden, a smaller symmetrical garden, long walks and avenues of trees – in particular one to improve the approach to the house. Part of the gardens were built on a little peninsular which stuck out into the lake, but that was removed to enlarge the lake by joining up two smaller lakes, and bring it closer to the house. The lake now covers a hundred and fifty acres.

By the late Eighteenth Century the Abbey must have been looking very unfashionable. This was not the architecture to delight the Georgians; it was not the architecture of of Jane Austen heroines or Enlightenment thinkers. It is fortunate that the old Abbey wasn’t demolished and rebuilt by the symmetry-loving Georgians, as many were; the glorious site would certainly have merited it. Or, left to rot, radically reduced, or rented out as a farm, as happened to other Tudor houses in Cheshire. 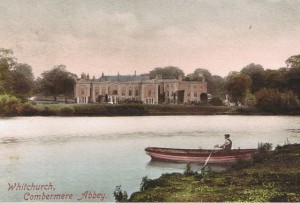 An early 20th Century postcard of an earlier view of the gothicised Abbey,  seen from the west side of the lake

Some alterations were made in 1795 by Sir Robert Cotton – possibly from his own designs – and the main body of the house was covered in brick and stucco at this point. The full gothicisation of Combermere Abbey took place between 1814 and 1821, under the ownership of Sir Stapleton Cotton, who was raised to the peerage as Viscount Combermere. On account of his great military successes he was awarded an annual pension of £2,000 a year, and that very considerable amount was doubtless a great help in funding the work. The Gothick details have been criticised as being ‘heavy-handed’; the problem though is that the work was poorly carried out. Perhaps he was rushing to have the re-modelling completed before a visit by the Duke of Wellington, who was a great national hero by then – though in fact that visit did not occur until 1820 (when the Duke and the Duke of Newcastle both stood as god-parents at the christening of Combermere’s second Son, named Wellington, who would inherit as the elder brother pre-deceased him). The large Wellington Dining Room was built to entertain the Duke, as was a long, projecting Entrance Hall, facing east, which served as an Armoury. 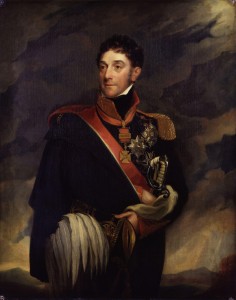 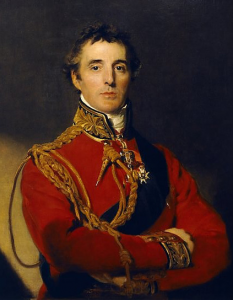 The first Viscount Combermere (left) and his guest at the Abbey in 1820, his former commander, The Duke of Wellington. Considerable building work was undertaken in anticipation of the Duke’s stay

Viscount Combermere commissioned two schemes to re-face and re-build the Abbey. The first was from Sir Richard Morrison from Middleton in County Cork, who worked with his son, William Vitruvius, in Ireland and England. They produced a design for a wholly new house at Combermere in 1829, which would stand on the site of the Abbey, but this was not actioned. The second scheme was commissioned from the fashionable architect Edward Blore, who is best remembered for enclosing Buckingham Palace into a courtyard plan. In Cheshire he also worked on Crewe Hall, and built Great Moreton Hall. Seen as very much an Establishment man, Blore was given a lot of Empire work, including the government house in Sydney. Some restoration was done in 1860 under the supervision of John Tarring, who did little work on private houses in fact, but specialised in splendid churches for Non-Conformists.

Blore’s idea was also to create a courtyard plan at Combermere Abbey, keeping the western wing and building new wings to the east and north. This would have made the house enormous. Nothing came of the plan, though his design for the Abbey’s Gothick lodge was built some years later, as was the lovely Stable block – which is now nine award-winning holiday cottages. It is easy to understand Blore’s thinking, with the long south service range and a large dining room to the north – built to entertain The Iron Duke – the Abbey had almost evolved into a square with a courtyard at its centre. 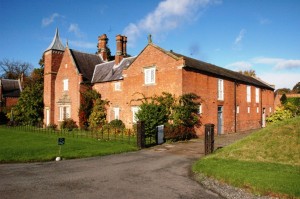 Over the years since then the long service wing on the south side has been lowered to just one storey. A delightful octagonal game larder now stands in a small yard by that wing, facing the buildings which contain the Estate Office nowadays. Both the long entrance hallway and the Wellington Dining Room are long gone, and the North Wing is at the mercy of the elements, awaiting restoration.

Having avoided Georgian symmetry, the Abbey is something of a warren of rooms, but at its heart is the Library, which was the Abbot’s Lodgings. All architectural historians agree that this is a room of great importance. It isn’t enormous; it is grand but it has human proportions. It would have originally been approached off a screen passage, as in a manorial hall – and that can still be seen in the layout. The magnificent hammer-beam ceiling is hidden by a ceiling, coved into the walls, beautifully finished with delicate plasterwork, and with dozens of heraldic shields on the coving. The walls are wood panelled, and on the east wall is the fireplace installed by the Cottons in the Sixteenth century. 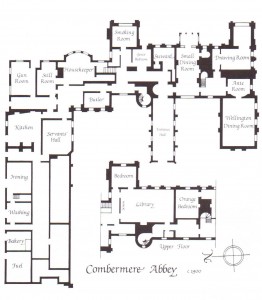 A plan of the Abbey in 1900, showing the long Entrance Hall/Armoury and the Wellington Dining Room, both now demolished. The compass point is out by 180 degrees! 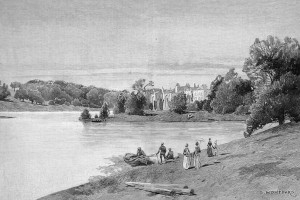 An engraving of the Abbey from The Illustrated London News, dated 1900, showing a boating party at the south end of the lake.

Not long after the First World War the Abbey passed from the Cotton family to the Sir Kenneth Crossley – industrialist and politician from Manchester – and Sarah Callander Beckett, who inherited the Abbey in 1992, is of his line. Two more re-modelling scheme were considered in the Seventies; the first in 1971, by the very eminent team of Raymond Erith and Quinlan Terry, and another in 1975 by James Brotherhood of Chester. The first was not enacted, and the second related to little more than the reduction in size.

Over the last half century the North Wing has suffered badly from decay and the exterior wall on the northern side fell away about fifteen years ago. The damage was slowly spreading into The Library, making the problem even worse. It is the renovation of this end of this historic and important house which can now begin.