For two seasons in the 1880s one of the most famous and glamorous women in all Europe rented Combermere Abbey so that she could indulge her passion for hunting; pursuing Reynard across the thrilling country of south Cheshire and north Shropshire, and well into western Staffordshire too – always riding side-saddle and thrusting ahead of the hunt. 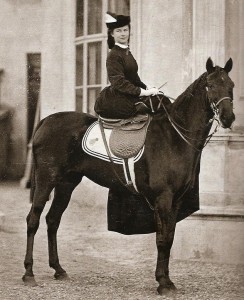 She was Elisabeth, Empress of Austria; tall, fabulously well-dressed, and possessed of a tiny waist – of which she was very proud. Famously she was always sewn into her hunting clothes by a seamstress so that she could wear them as tight as possible, and another seamstress and a groom would always await her at the furthest point from the Abbey in case she needed personal attention or a fresh mount. To a certain degree though she was a free-thinking rebel within one of the grandest royal houses on the continent; a suffocating environment from which she escaped as often as possible.

I’ve written before about the Empress’s stay at the Abbey (you can read that by clicking here), and the fact that she made alterations to the house to suit her better, how she brought servants, horses and even a cow across Europe in her personal train – and how the local railway station was expensively extended to accommodate it. The national newspapers in this country followed her stay avidly – as they might cover the progress of an A-list celebrity today – with a diary of her hunting adventures, and illustrations of the Abbey (below). 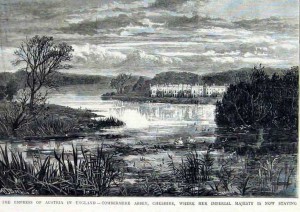 Some new and fascinating facts have come to light recently, including the results of an auction held earlier this year in Germany. The Empress lived a life of astonishing opulence, and owned some of the finest clothes and jewellery of the time. She claimed to dislike ostentation and opulence – she wrote; “What do sceptres, crowns and purple ceremonial mantels matter?  They are only derisory, coloured rags, ridiculous rattles with which we vainly try to cover the nudity of our souls, when we should be thinking of safeguarding our life and our intimate feelings.” Somehow or other though she did manage to live a life of great material luxury, and owned and wore sensationally extravagant and expensive clothes and jewels. She was very generous though, and would give personal gifts without any thought for their value. When she left Combermere she gave some of her jewellery away to the Abbey’s servants, which must have been like a modern-day lottery win.

Her personal jewellery box has come to light, and it would have accompanied her to England. Elisabeth only ever let herself be seen wearing her very finest things, and would have dined wearing her jewellery. 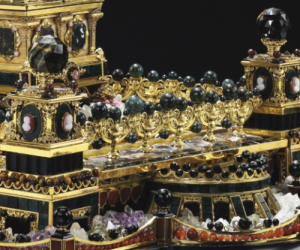 It was a present from her husband, Franz Joseph I, Emperor of Austria, who commissioned it on the occasion of their marriage in 1854. The case is designed in the form of a magnificent castle and is covered with amethysts, rock crystal, malachite, amber and tiger’s eye, mounted in doré bronze. The centre of the box is raised on four doré bronze paw feet, and those feet carry portrait cameos of Empress Elisabeth and Franz Joseph. It must have cost a fortune to make and have been the work of the very finest craftsmen, and must be worth millions today (though it wouldn’t be to everyone’s taste, to say the least).

At the auction held in the spring of this year a brooch with a single pendant pearl which was made for the Empress, and which she – typically – gave away (this time to her daughter, Archduchess Elisabeth), was sold for 5,000 euros – which seems cheap. It must have been typical of the pieces she handed out to the astonished Combermere servants. On the other hand, among a number of other items of hers, an elegant riding hat which was worn both by the Empress and another daughter – Archduchess Marie Valerie – made all of 134,500 euros. 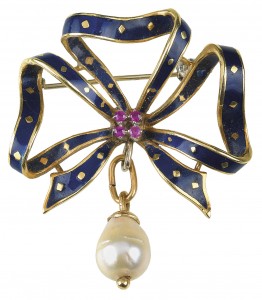 Ultimately, though, her later years were terribly sad. Her marriage had become a misery and, controversially, she lived apart from Franz Joseph, she went into a severe mental decline following the death of her only son, and was assassinated by an anarchist in 1898. She sensed that she was close to death, and that it would not be unwelcome. She wrote; “The thought of death accompanies me day after day, it acts like a gardener who cleans the garden, but who wants to be alone and becomes irritated if curious people look over the wall.  So, I hide my face behind my sunshade and my fan, so that the idea of death is able to work peacefully inside me. I know that I am walking towards a frightening goal which is assigned to me by Destiny. I shall leave like smoke that drifts away, my soul will flee through a tiny little opening in my heart.” 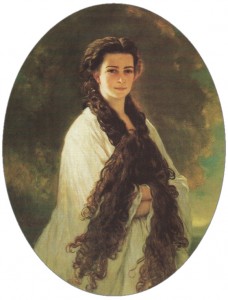 There is a widespread nostalgia for the glory days of the Empire in middle-Europe nowadays, and Elisabeth is claimed for their own by both feminists and royalists. A film about her life, so-written with her niece, was made as long ago as 1921. She has been portrayed in a number of television and film dramas and documentaries since then, as well as being the subject of several books.

Her murderer is seen as having killed one of the very few members of the continental royal families who had the common touch and was well-regarded by the people. It is pleasing that this remarkable, beguiling, beautiful – but doomed – lady spent some of her happiest times at Combermere Abbey. 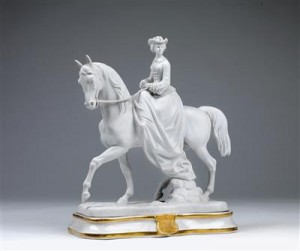