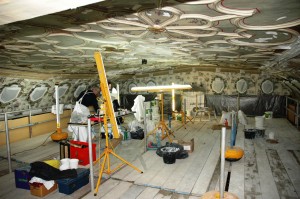 With the scaffolding platform covering the entire area of the Library, work on the ceiling is much easier. The conservators from Hare & Humphrey have found evidence of a lot of previous piece-meal restoration, some of it within the last fifty years or so, (though no one has any memory of this). It is unlikely that previous restorers had, in effect, a false floor to work from, and they would probably have been up a ladder, or at best on a small scaffolding tower. The platform brings everything within arms’ reach, as you can see from the photograph. It makes the job a lot quicker and also a lot safer. The boxed area you can see in this picture of the east wall is the top of the fireplace, carefully protected from any possible harm. 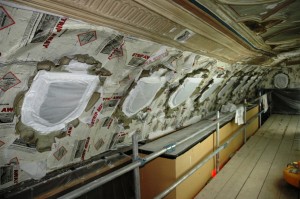 With the heraldic shields and the small crests masked off (the areas covered in plain white paper), all the areas between the shields have been treated with a mild paint-stripper. This comes as watery paste, which smells of almonds – which is slightly alarming as anything which smells as almonds is usually cyanide! Despite its smell the chemical does not give off fumes and safety breathing gear in not required when it is being applied, nor while it dries.

The stripper is then covered with a special paper strip – seen with black print on it in the photo – which will be peeled off after a couple of days, and will bring the stripper and the top layer of paint with it. This will obviously bring the surface dirt off too. Once the paper has been removed it is not hazardous waste and does not require special disposal measures. As well as atmospheric dirt the worst of the discoloured will have come from years of open fires, plus cigar and cigarette smoke. The conservators think that the ceiling paints will have become discoloured quite quickly, and the family will have enjoyed them at their brightest only briefly. 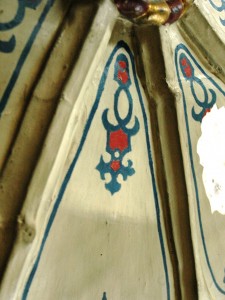 In the photo above the area at the top of the triangular element, including the blue and red device, has had the top layer stripped away to reveal the original paint colour – a pale grey/green. With the covering paper pulled away all the surfaces will be restored to this tone. 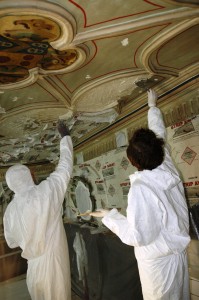 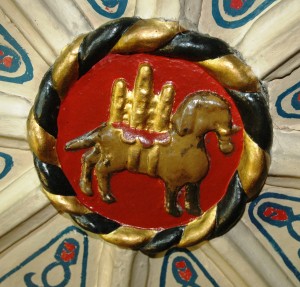 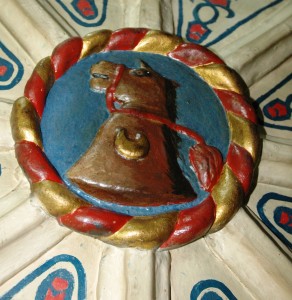 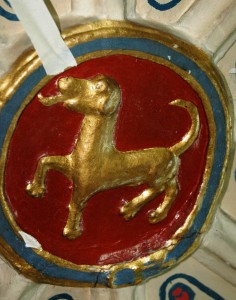 Thanks to the platform we can now get up close to the ceiling bosses, which reproduce the crests on the coving discussed in last week’s post. Here we see better examples of the elephant and castle of the Corbet family, the head of a tethered bear – the crest of the Breretons, and the dog with his tongue so rudely stuck out (a talbot; see http://www.combermere-restoration.co.uk/wp-admin/post.php?post=346&action=edit) which in this instance denotes the Grosvenor family – the Dukes of Westminster (whose seat at Eaton Hall is some sixteen miles north by north west as the crow flies). 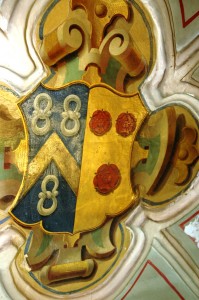 We will come to the Cotton arms soon, in all its variations, but on this shield the left hand side is described in heraldic terms as “Azure, a chevron between three cotton hanks palewise Argent”. The hanks are the figures of eight; representing lengths of carded cotton tied up for ease of transportation. There is no evidence of the family making cotton; the device merely comes from the surname. The chevron – from the French word of the same spelling meaning rafter (as in the roof of a house, and indicating protection) – was granted to someone who had done a special service for their monarch and country. The red rose is the symbol of the house of Lancaster, of course. 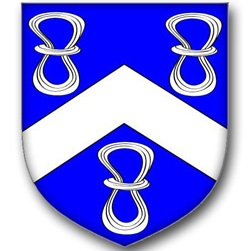 The ‘basic’ shield of the Cotton family. 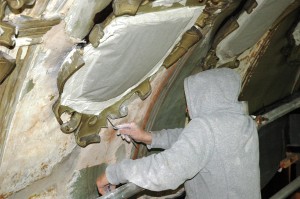 No, it’s not a Cistercian monk in one of their distinctive grey habits, time-travelled forward half a millenium to assist with the conservation; just one of the ‘wet’ tradesmen.