At the extreme south-west of the main group of buildings which comprise Combermere Abbey is a long service block, which stretches from the north-east down to the south-west. It faces another block of similar length to the north, across a rectangular cobbled courtyard, with The Game Larder between the two, to the south-west. The block is single storey in the centre, rising to two stories at both ends, built of local brick under a slate roof. There have almost certainly been buildings of some kind on this site since early monastic times, but the present structure is probably around two centuries old at the most – albeit with mid-Twentieth century windows. The block is in an attractive setting; to the west it looks over the lawns which stretch down to the southern end of the mere, while to the south it faces the Abbey’s attractive kitchen gardens. 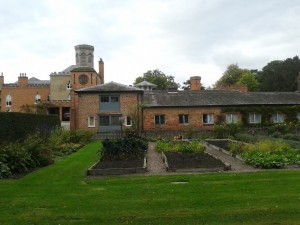 The service range from the south, seen across the kitchen garden, with the new estate office on the left and the clock tower behind it 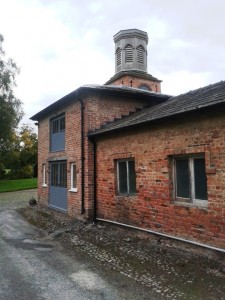 Above and below: the estate office and clock tower after restoration 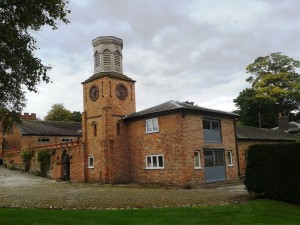 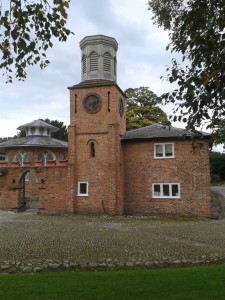 The clock tower with the game larder to the left, inside the courtyard

At the south-west corner the building forms a very attractive eye-catcher, with a clock tower surmounted by a louvred, octagonal timber cupola to accommodate a bell. With its buttresses, arrow slits and lancet windows the tower can be described as gothic – probably the first instance of gothick revival architecture on the estate. It is a relatively modest and simple building, but very attractive – due in part to that simplicity, and its vernacular materials. It is Grade II listed.

In living memory the ground floor of this section was used as a boat store; it had two double doors facing south, which can be seen in the current design. This end of the building was in very poor repair until 2009, when the exterior was restored. The interior, with its exposed beams and, on the ground floor, much older-looking stone details (including a low, gothic doorway) was restored in 2011/2).

Inside, this building is thoroughly Twenty-first century, with a wealth of technology, as it is now the Estate office. With a single room on the ground floor together with a lobby, a toilet and a small kitchen (in the base of the clock tower), and a single room on the first floor, reached by a dog-leg stairway in the north-east corner. There is no accommodation in the clock tower either on the first or second floors. 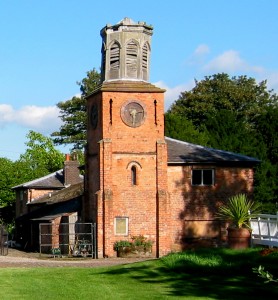 The clock tower from the west before restoration

The clock tower was added by the-then Baron Combermere (after 1827 the first Viscount Combermere) in 1815 or soon after as a celebration the great victory at the Battle of Waterloo of his some-time military commander, The Duke of Wellington. Many such edifices were created across the country to acknowledge the final defeat of Bonaparte. Thus it pre-dates his gothicisation of the Abbey by just a few years.

The four-faced clock was made by J B Joyce and Company of Whitchurch in Shropshire (the nearest town to the Abbey). It is said that the company began making clocks in 1690 but there is some dispute of this date. Certainly the business was well-established in large premises in the High Street in the town by 1790, and in 1834 they moved to a new and handsome red-brick building close to the town’s railway station. The firm specialised in large-face public clocks, and supplied most of the British railway companies, and exported their work all over the Empire. The firm was sold in 1964 and merged with a rival clock-maker in Derby. The Station Road premises have recently re-opened as an auction house. 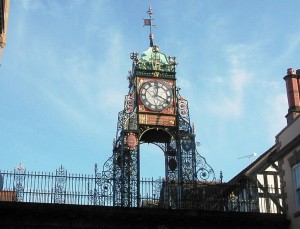 The famous Eastgate clock by J B Joyce in Chester city centre, made 1899

The customs house clock in Shanghai in Chine, made by J B Joyce of Whitchurch in 1927