Sir Kenneth Crossley’s eldest daughter, Fidelia – born June 1 1905 – had both a pilot’s license and her own plane from a relatively early age. She took off and landed from a field which was then part of the Combermere Estate (though it is no longer) which became known as The Aerodrome Field (Sir Kenneth had the telegraph cables placed underground). She took to air competition as soon as she had her pilot’s license, and competed extensively at home and abroad. 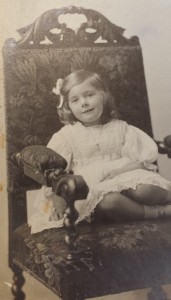 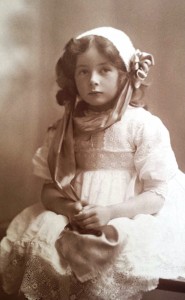 Her niece, Lady Penelope Lindsay (the mother of the Abbey’s current owner, Sarah Callander Beckett), who lives in a delightful gothick house on the estate, remembers her well, and describes her as “Very short, tiny really, but very feisty. She was very spinsterly, but great fun”. Fidelia’s younger sister, Pam (born December 30 1913) was to follow in her father’s and sister’s footsteps as a aviatrix.

It was not at all unusual to find women piloting aircraft in the Thirties. Pilots’ licenses were introduced in 1911, but by 1926 barely more than half a dozen were held by women. The numbers increased from then on though; 28 in 1929, 66 in 1930, and more than two hundred over the next four years. 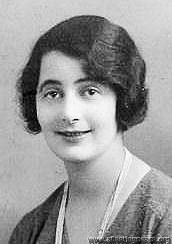 Fidelia as a young woman; thought of a “spinsterly”

These adventuresses were women with considerable disposable income – if not their own, then their father’s or husband’s. All of them had grown up in the shadow of The Great War, and they weren’t to be gain-said in their determination to find excitement and compete with men on equal terms.

Fidelia Crossley (known to her chums as Delia) got her flying license in 1930, when she was twenty five years old, and like her father she had no need of local airports; she took off and landed from the fields at Combermere. 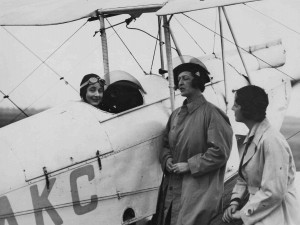 Less than a year after qualifying she took part in the most prestigious air race of the day, The King’s Cup, in a De Havilland Gypsy Moth. She came twentieth out of twenty one pilots who finished, but considering that she was the only female entrant and that as many as finished dropped out, that was good going. Later that year she flew round Ireland, landing and taking off in fields (there were no airports in the Republic of Ireland until Dublin Airport was built in 1940). It’s very likely that Delia would have bought her Moth from Malcolm Campbell (London) 1927 Ltd – the company of the famous record-breaker – who were the De Havilland Moth sales agents in the UK. 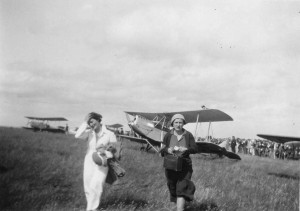 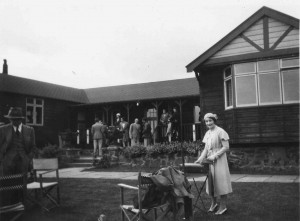 Two photos of Delia (on left in the top shot), probably at Heston aerodrome in 1931 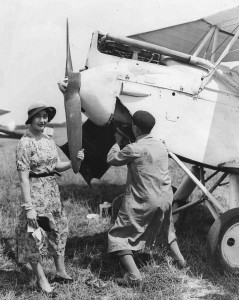 Delia – dressed for a garden party rather than for flight – holding the propellor. A mechanic is checking the engine.

Delia used her plane for political purposes the following year; flying campaign literature from London to the north of England in support of Ramsey MacDonald’s coalition National party. That year she took her plane to India to race in The Viceroy’s Cup, after selling her De Havilland (G-AAKC) to her father – which she had bought from the world-famous record-breaker Malcolm Campbell.

She also raced from London to Newcastle, from Heston to Cardiff, and round Yorkshire. There was a full page-width photo of Fidelia being waved off from the start of the 264 mile London to Newcastle race in the August 12 1932 edition of Flight magazine. In the May 13 issue they had reported that she had acquired a new Comper ‘Swift’ plane, registered G-ABUA); every new plane bought – let alone by a young lady – was news. 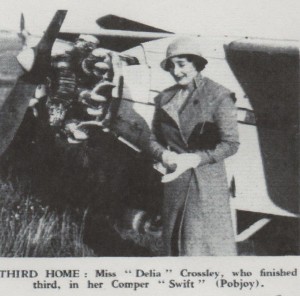 After the start of the Second World War she volunteered for service in the Air Transport Auxiliary, which was founded in 1940 to ferry new and damaged planes to assembly points and maintenance depots. The ATA also flew important personnel, and acted as an air ambulance service when needed.

It was difficult and dangerous work, and casualties among the high number of female pilots were high. For a period Delia flew Stirling bombers single-handed, and was shot at by German fighters but managed to evade them. When the ATA was disbanded in 1945 Lord Beaverbrook said, “Without the ATA the Battle of Britain would have been conducted under conditions quite different from the actual events. They carried out the delivery of aircraft from the factories to the RAF, thus relieving countless numbers of RAF pilots for duty in the battle. Just as the Battle of Britain is the accomplishment and achievement of the RAF, likewise it can be declared that the ATA sustained and supported them in the battle.”

On occasion Delia had raced against the most famous female aviator of the age, Amy Johnson, who also joined the ATA, and who died in January 1941 when her plane crashed into the Thames estuary (the crew of HMS Haslemere saw her parachute free of the plane, and with incredible bravery the ship’s captain, Lieutenant Commander Walter Fletcher, jumped overboard from the ship to try and save her. The weather was terrible; heavy seas, snow and a strong tide. He failed and her body was never found).

In the autumn of 1949, aged 44 and despite her “spinsterly” appearance, Delia Crossley married Geza Schubert and her flying adventures came to an end. Gez, an Austrian Jew who had been brought up in Bratislava in Czechoslovakia, had been married before and had two sons by his first wife.

Delia was, it was said by all, “a jolly good egg and a terrific pilot”, and that’s not hard to believe. She retired to the south of France, where she had a reputation as a ferocious player of contract bridge. Omar Sharif was a frequent adversary across the baize.