We’ve discussed the origin of the name Combermere before – sometimes spelled as two words; either Cumber Mere or Comber Mere – and it was probably in existence before the establishment of the Abbey (and that the Abbey took its name from the place, or the lake, as was common practise). There is no mention of any variation of the name Combermere in Domesday Book so we can’t be entirely sure.

The name appears elsewhere in the world, but in every instance it hasn’t emerged independently, but owes its name to Viscount Combermere. There are about a dozen roads, lanes and avenues in Britain which bear the name.

Particularly well known is the Combermere Barracks at Windsor, named very appropriately after the first Viscount as he was a great and famous cavalryman.  The Household Cavalry Regiment is permanently based at Combermere Barracks, close to WindsorCastle. The regiment has a Formation Reconnaissance battle role these days, but still looks magnificent on horseback. The Combermere Barracks was opened in 1804, and now covers twenty acres. Prior to the early Nineteenth century the cavalry divisions were billeted across several local towns and villages.

Combermere Bay is on the central western coast of Myanmar (Burma), at the entrance to the harbour town of Kyuakpyu. And there’s not a lot more to say about that.

The Combermere Hotel is a very modern and luxurious hotel in Shimla in northern India. In 1828 Lord Combermere, then the Commander-in-Chief of the British forces in India, had his troops build an astonishing three mile-long section of road (between Chota and Shimla) and a bridge over a very fast-flowing mountain river, which was a huge boon to the local people. The temperate climate in Shimla was very popular with the British men and women of the Raj during the hot summers. The bridge, typical of the work of the ever-energetic and diligent Victorians, is still standing today. 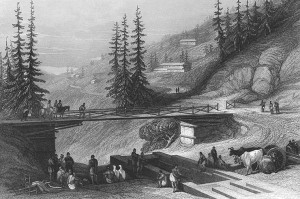 A contemporary engraving of the building of the new bridge in Shimla by Lord Combermere’s sappers. 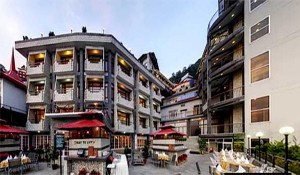 The Combermere Hotel in Shimla.

Wellington College in Berkshire is a boarding school which has a Combermere girls’ ‘house’ All seventeen of the College’s houses are named after distinguished military men.

In 1817, Sir Stapleton Cotton became the Governor of Barbados. Sir Stapleton Cotton (later Baron, and then Viscount Combermere) became the patron of the Society for The Promotion of Christian Knowledge, and in 1819 he was the moving spirit behind the raising of £22,630 to erect a new building and re-organise the old Free School into the Boy’s Central School. In 1879, the Boy’s Central School was re-organised and reconstituted as a second grade school. One year later, in 1880, the Boy’s CentralSchool was renamed Combermere School in honour of Lord Combermere its benefactor.

In 1975 Combermere School became the first Grammar School in Barbados to become open to both girls and boys. Its more famous old girl is the singer Rhianna. In 2004 Rhianna won the school beauty pageant and was crowned ‘Miss Combermere’. She sang a song by Mariah Carey as part of her winning appearance, which can be found on YouTube by clicking here. The Combermere Scout troop is the oldest in Barbados and celebrated its hundred and second Anniversary in 1962.

Madawaska Valley in Ontario in Canada is made up of three very attractive towns; Barr’s Bar, Wilno and Combermere – north east of Toronto. The valley is just south of the 3,000 square-mile Algonquin Provincial Park. The area was colonised in the late Nineteenth century when areas were cleared in the forest for settlement and farming. The earliest settlers had come from many different backgrounds and nations, but the English came to dominate.

The settlement was originally called Dennisons’ Bridge, and was not much more than a stop along the Peterson Road. That name came from Captain John Dennison, an early pioneer in the area. He had been an officer under Viscount Combermere, so it was decided to move up the ranks and name the town after the Field Marshal and Viscount. The area was part of Upper Canada at that point, but Canada became a self-governing colony of the British Empire in 1865. 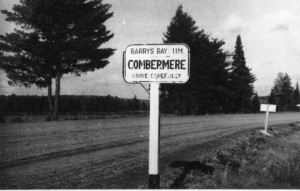 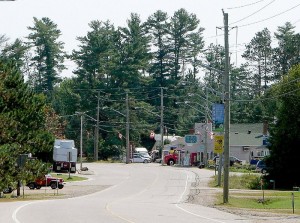 With the rapid growth of the timber industry a railway was built to cover the 250 miles from Ottawa to Parry Sound so that felled timber could be exported. I haven’t been able to find a population figure for Combermere, Ontario, but the community is best described as a hamlet. It is in a very picturesque part of the country, and is popular with tourists – especially those passionate about boating and walking. It has a regular farmers’ market. In August 2006 Combermere suffered damage from a tornado, but no lives were lost.

Moving away from geography, the famous Moorcroft pottery used the name Combermere for a range of small goods which have a dark green background and are decorated with pinky-white and blue bluebell flowers under a high-gloss varnish. These are greatly prized and even a small piece can cost two and three hundred pounds. Moorcroft was founded in Stoke-on-Trent, so Combermere was doubtless well known to them. The Moorcroft Combermere design has also been used on printed matter such as greetings cards. 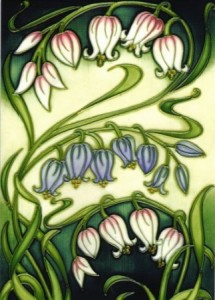 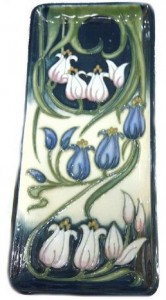 The equestrian clothing company Aigle – best known for their boots – make a Combermere sweater, with no obvious connection to the Abbey of the Viscount. 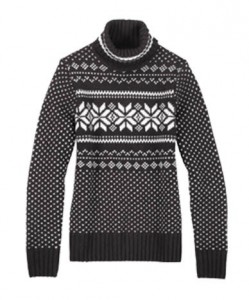 The SV (Sailing Vessel) Combermere was built by Richardson, Duck and Co of Stockton-on-Tees in 1881. It was a large, ocean-going three-master with a iron hull and a length of 250 feet. It was registered to a shipping company based in Genoa. It was sunk by a German submarine, U-37 – on January fifth 1917 off Cabo de Gata, east of Almeria in southern Spain.

And finally, there was a Combermere Colliery in Shakerley, in Tyldesley (which was in Lancashire but is now part of Greater Manchester). It was opened in 1867 and had two shafts; one was for ventilation, and a main shaft which went down six hundred feet. It was operated by The Tyldesley Coal Company, but was soon exhausted and was closed in 1893. It then became a brick works. The bricks were made using clay which had been excavated in the building of the mine. There is no known connection with Combermere Abbey.