This absolutely fascinating photograph has just come to light; found by Sir Nicholas Mander of Owlpen Manor in Gloucestershire – and Sir Nicholas very kindly sent it on to us. 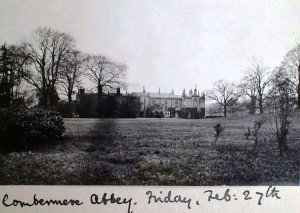 It was taken by his great-aunt, Daisy, and as you can see it is dated Friday February 27 – and the year is 1914. It’s rather hard to see (click the photo to enlarge it), but The Cheshire Hunt has gathered for a meet in front of the Abbey’s main door (that’s the east front; we’re looking west – the lake is on the far side of the house). I don’t know what the white structure is to the right of the front door, but it could well be a gazebo, and footmen might be serving stirrup cups from there.

It is almost a cliché to say so, but this really is a last glimpse of a disappearing world; the final swansong after the great Imperial apogee of Edwardian England. Within six months the entire British Empire would be at war – a war which was hugely under-estimated by the politicians and the generals alike in terms of its longevity, its horrors, its casualties, and its repercussions. Both Britain and its Empire would never be the same again, and the long sad decline of the country house would begin. There would not be enough staff to maintain the houses and estates, taxation would destroy the financial security of many, and – perhaps most tragic of all – so very many of the heirs to these great houses, officers who lead their troops from the front, showing ill-advised courage and armed with nothing more than a revolver and a swagger stick, would be in their graves. 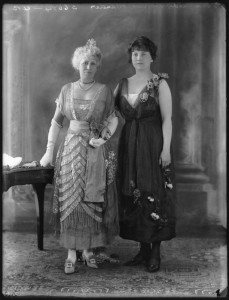 Daisy St Claire Mander with her mother; both dressed to impress, in the early Twenties

Daisy Mander was born in 1887, so she was twenty seven when she took this photograph. By this time Kodak were producing pocket-sized cameras which were rugged and reliable. The Kodak ‘Vest’ folding bellows camera cost £1 10 shillings in the UK, which would have been expensive for the working man or woman but was very little to a daughter of the gentry like Daisy. Many were taken to war from August 1914 onwards. 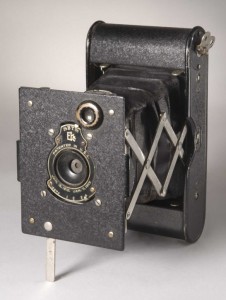 A Kodak camera of 1914, such as Daisy might have used at the Abbey

This was the first meet she had attended with the Cheshire, and she was a very dedicated hunter. Throughout the season she would be out most days of the week with one pack of hounds or another – and if not in England then in France (where she hunted as far south as Bordeaux).

Daisy lived at The Mount, near Wolverhampton – a great neo-Jacobean mansion built in 1856, and bought by her family in 1890 for £5,000. The Mander family had been prominent citizens and employers in the town since the mid-Eighteenth century. Both her grandfather – Charles Benjamin Mander – and her father – Charles Tertius Mander – were successful industrialists, with interests in many manufacturing businesses in and around the town.

She was passionate about many things, including politics – her family were noted Liberals – and Wolverhampton Wanderers football club, of which she was something of a mascot. She was an avid collector, and her civic duties included being a county councillor, sitting as a Justice of the Peace, and being the Girl Guides commissioner for Staffordshire.

Daisy died in 1968, aged eighty one. She had never married; she was wed to the hunting field and Wolverhampton Wanderers. 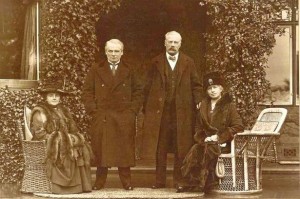 Daisy (on the right) with her parents, Sir Charles and Lady Mander, and the wartime Prime Minister David Lloyd George, at The Mount just before the 1918 election. This was a landmark election; the first after The Great War, the first in which women (over the age of thirty) could vote, the first in which all men over the age of twenty one voted, and the first general election held on a single day. It was known as ‘the khaki election’ because of the large number of de-mobilised servicemen who voted, and it was in this campaign that Lloyd George uttered his famous line, “What is out task? To make a Britain a fit country for heroes to live in”. The winner of the election was the Conservative party, lead by Andrew Bonar Law; the Liberal vote having been split in two by rival factions. 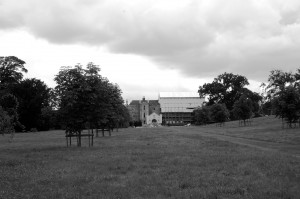 Looking at a photo taken at the same spot on August 13 2014 the differences are considerable. The many elm trees are long gone; victims of Dutch Elm Disease – replaced by ten still-young horse-chestnut trees. An oak on the slightly rising ground to the right came down in the storms in early 2014. The Wellington Wing, on the right, was demolished in 1975 – the house is still as long but that wall is flush; there is no projection. The North Wing and part of the centre of the house is temporarily under a protective ‘tent’ while renovations are under way. On the left hand side the three storey wing was reduced in height to two storeys – behind the trees on the left – also in 1975. The doors to the entrance hallway are difficult to see in the 1914 photograph; one hundred years the porch is lighter in colour, and in front of it is a pile of rubble from the building work. Another photo will be taken from this spot when the restoration of the North Wing is completed.