Although the demolition and removal of old and decayed building materials still continues in the North Wing at Combermere Abbey, new material is already going in. Brickwork is being reapired with Cheshire bricks, and having cut rotten wood away the joiners are cutting new pieces and they are being inserted. Some of the new timberwork is being pegged in, as it would have been in late medieval and Tudor times, but larger beams are being secured with deeply counter-sunk  steel bolts.

The new timberwork follows the pattern of the original wood exactly, even where it is going to disappear behind behind covering surfaces both inside and out. No short cuts are being taken and the original form of the Abbey’s timber frame is being followed faithfully. 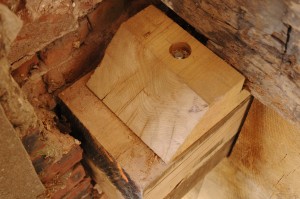 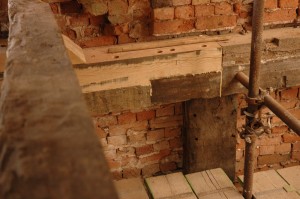 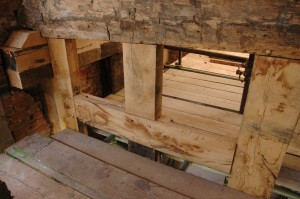 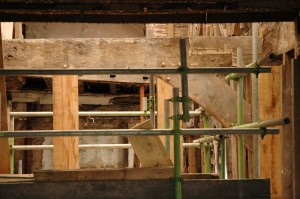 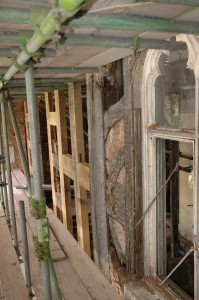 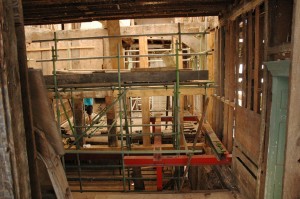 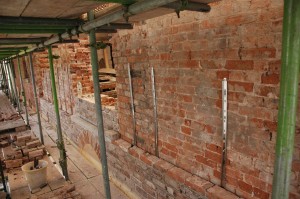 The new brickwork has the advantage of modern alloy stretchers, pinned vertically. 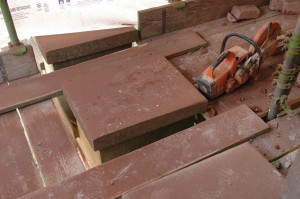 The coping stones of what remains of the eastern side of the North Wing, which was built for the visit by The Duke Of Wellington in 1919 peep up through one of the lower scaffolding corridors on the north-eastern corner (see photo below). 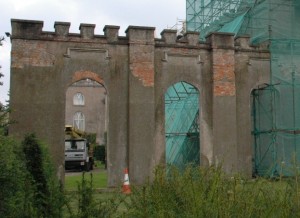 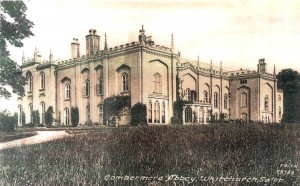 September 23 2014: A couple of weeks on from the piece posted above we can see yet more progress in the North Wing. There are hundreds of newly-made bricks being added to the old ones, and new wood is meeting timber of several different ages. Where needed the larger beams are bolted into place – often with very sizeable bolts – and in other places the timbers are being joined with wooden pegs, as they would have been for many centuries.

It’s immediately apparent now how much easier it is to restore the North Wing with the roof and all supporting timber-work removed. Access from the four-storey staffolding walkway around the Wing is excellent, and reassuringly safe. 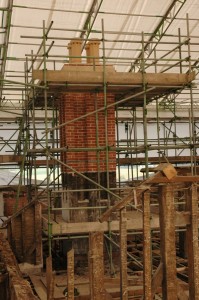 The original chimney stack was in very poor condition and had to be reduced greatly in height before a solid enough base was established. It was now been re-built with new bricks and chimney pots, to exactly the same fluted design. 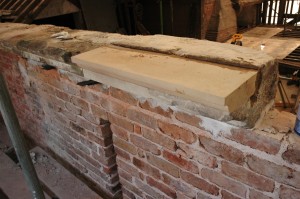 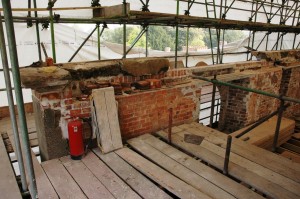 New brickwork in the extreme north-east corner of the North Wing. The majority of the capping stones on the cornice are being replaced with especially-made copies. 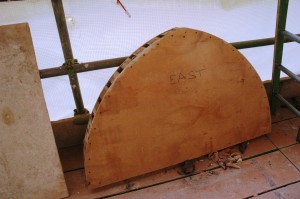 Every window opening had its own former or template so that the new openings mirror the original shape exactly. 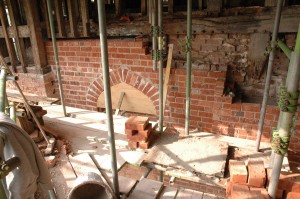 A template in position, with new bricks mortared into place around the arch. This is on the south-facing return on the west face. 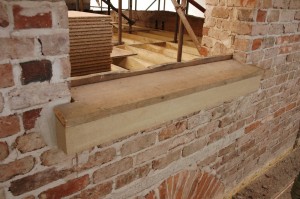 A new sandstone window-sill, with a temporary wooden protector to avoid accidental damage 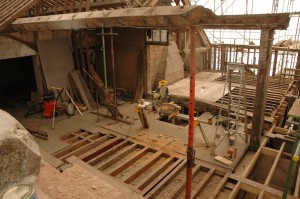 This scaffolding pole is probably providing better support than this horizontal beam has had for several decades. Many of the originally verticals had rotted away within the structure and ended in mid-air, no longer reaching their lower joints. 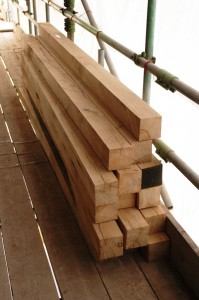 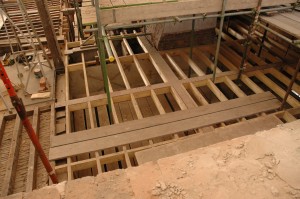 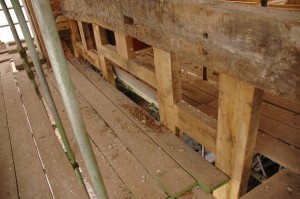 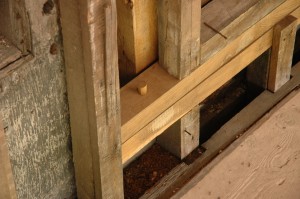 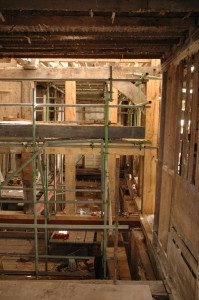 The really exciting and creative part; where specially-cut new timber is going in and is mated up to original timber still in good condition. 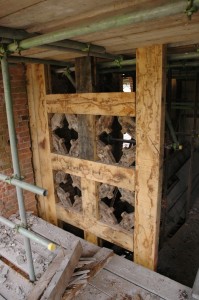 A very creative mix of new timber and old. Part of a Tudor wall, with a newly-made framework, which has been jointed to accept the original quattrefoil inserts. 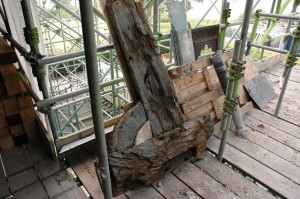 Once removed, Tudor timbers such as these are examined to see if any parts can be saved, restored and built into the Abbey’s wooden frame once again. 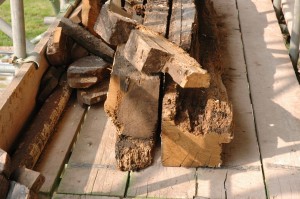 Although many of the old timbers are badly rotted, there is wood to be salvaged in the core of the beams. These cannot go back into their original place though as their dimensions in section are greatly reduced. 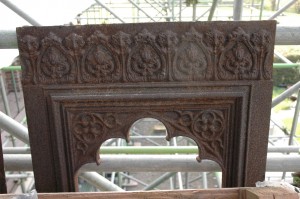 A rather fine Georgian cast iron fire surround, probably dating from the gothicisation of the Abbey. This can be restored.