One fascinating find uncovered during the restoration of Combermere Abbey’s North Wing has been a perfectly preserved wine bottle, dating from the middle of the Eighteenth century. 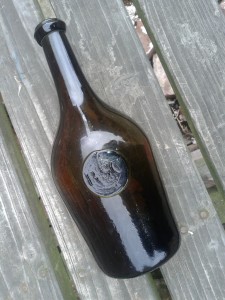 Alcoholic drinks have been consumed at Combermere Abbey since it was built in the first half of the Twelfth century. The workmen – carpenters, masons, carters, labourers – would have been sustained with ale, and monastic accounts show that medieval monks drank at least ten pints of ale each every day. As there was nowhere locally to supply the Abbey with this it is likely that there was a brewhouse on the site somewhere (brewing wasn’t a male preserve; many brewers were women). ‘Small’ beer would have had a strength of just 2% or so, while the strong beers were very intoxicating by our standards, with an ABV in the region of 11%. As well as avoiding the dangers of probably infected water, beer drinking provided nutrients; during the fasting of Lent ale rations were doubled so that the monks kept up their strength.

The Romans had grown vines to make wine in England, and this was revived by the Normans after 1066. At least a dozen monasteries had their own vineyards and made wine. Henry II encouraged the importing of wine from Bordeaux in the late Twelfth century, and specialist wines such as claret, port, Madeira, sherry, hock and Mosel began to appear in the following century. Wine production in England began to die off though. It appears that viniculture suffered during and after The Black Death; vines went untended, understandably, but were not cared for in the years following the epidemics as other forms of agriculture were more productive and more urgent. It seems that monastic vineyards were largely destroyed during the Dissolution, and the Tudor grandees preferred imported wine. 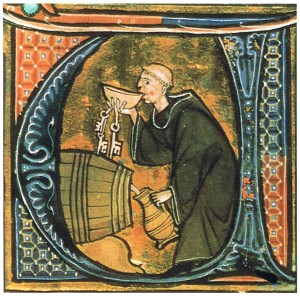 By the Seventeenth century there were very few vineyards in England. Famously the botanist John Tradescant planted the huge number of 20,000 vines on his employer Lord Salisbury’s estate in Hertfordshire and the vineyard prospered. In 1666, the appropriately-named John Rose, Gardener to Charles II at His Royal Garden in St. James’s, wrote a treatise on the cultivation of vines in this country. This was titled ‘The English Vineyard Vindicated’, in which he discussed the question of site selection, vine varieties, pruning and training and care of the vines up to the harvest. It isn’t known if anyone was inspired sufficiently to create their own vineyard after reading the treatise though.

One of the most famous vineyards of the following century was that at Painshill Place at Cobham in Surrey, which was planted by the Honourable Charles Hamilton in 1740.

Our newly-found wine bottle is in perfect condition, made of solid green glass with a deep push-up base – which has been quite roughly worked. Its overall shape is typical of a wine bottle of the period, and an embossed cartouche holds the initials RSC. This must allude to Sir Robert Salusbury Cotton, Baronet, who lived between 1739 and 1809. His main residence was not Combermere but the larger Cotton estate of Llewenny in Denbighshire (though he died at Combermere Abbey). He married a Welsh heiress, Frances Stapleton, in 1767, who brought the Stapleton name into the family – which was the first name of their eventual heir (in time he doubled it up, becoming Stapleton Stapleton Cotton, first Viscount Combermere of Bhurtpore). 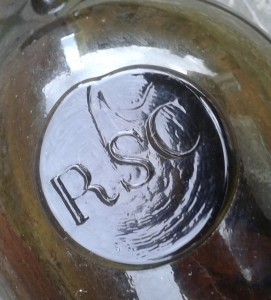 This indicates that Sir Robert had his own wines bottled especially for his household, as many wealthy families did. We do not know who the wine merchant was, nor where the wine was made. Sadly it is unlikely that the Abbey had its own vines by this point. It is possible that the wine was imported from France – the most likely country of origin by far – in the barrel (en primeur), and bottled in this country – indeed, possibly at the Abbey itself.

It would then have been stored in cool, dark conditions to mature, and in fact the bottle shows signs of this. Organic material inside has left a stain, indicating that it was stored on its side in the usual way. There is a fairly substantial amount of what must be sediment still inside the bottle. Specialist analysis of this to discover the origin of the wine would be fascinating.

The wine was probably drunk from beautiful, English-made drinking glasses, rather than the Venetian glasses popular previously. In 1676 George Ravenscroft introduced lead oxide into the production process for glass, making it quite unmistakeably different from anything seen previously. The new English style (façon d’Angleterre) was born alongside the equally important invention of English lead crystal, which made England dominant in the production of glassware, which was exported far and wide. These glasses are much collected and very valuable today (and were always held by the base, not by the stem). 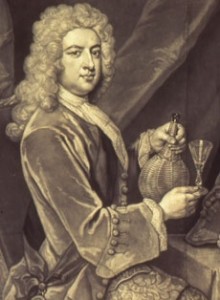 I am pleased to be able to confirm that to my certain knowledge the nine hundred year-old tradition of alcohol being consumed at the Abbey continues to this day.