The replacement woodwork of window frames and staircases in the North Wing has been the work of RM Jones Joinery of Ruthin in North Wales. The firm’s owner is Meredydd Jones, and his family has been active in house building and woodworking in and around Ruthin for several generations. Meredydd worked as a joiner on building sites originally, and started his own company near the town – in a unit rented from his uncle, who was also in the building trade – some thirty five years ago. The company built their own factory eight years ago on a new industrial estate just to the north of the town – close to Ruthin’s well-known crafts centre (which was completely re-built eight years ago, and on which RM Jones worked, of course).

In the firm’s early days he had, as he says, “just one or two lads” working for him, but nowadays the figure is nearer to two dozen. “Our core work is staircases and windows”, he says, “but we also do cabinet work and kitchens. Recently we’ve built a number of porches and large external timber balconies.”

RM Jones’s work at the Abbey has included staircases, and a large number of windows – and internal fittings such as skirting boards are yet to be undertaken. All of which were made with great precision to exactly replicate the original items. Very interestingly, the original window frames had been made out of a variety of woods. Some were in oak, as one would expect – the Tudor timber frame is oak and there was a lot of oak available locally – but there were also softwoods, some bits of Douglas Fir, and even mahogany. RM Jones has used seasoned oak throughout – though a lot of the new oak is imported from France, which would have either amused or horrified both the Tudors and the Georgians. 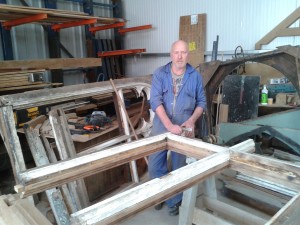 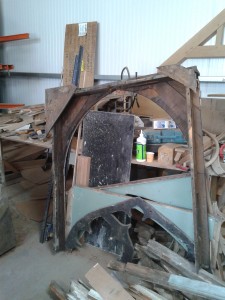 Some of the carcasses were originally made within rectangular frames, as above and below. 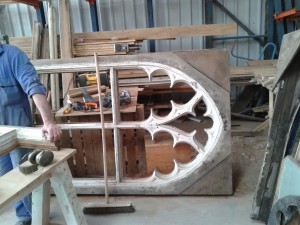 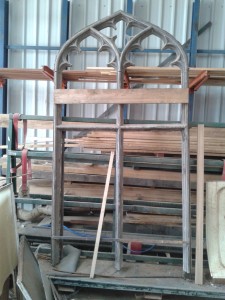 A partly restored window, with as brace keeping the longer sides square 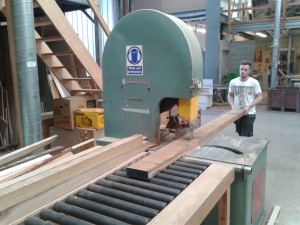 Two hundred years ago this process, the first cut of new wood, would have been undertaken over a five foot-deep saw-pit, with the blade of a long, double-handled saw sitting vertically – with one man up top and one poor unfortunate below, sweaty and covered in sawdust. 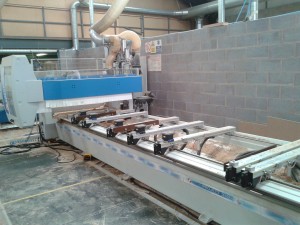 The factory’s single most expensive piece of equipment; a computer-controlled cutter and former, which can handle very complex designs very quickly. 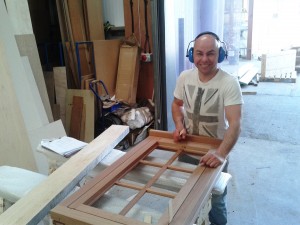 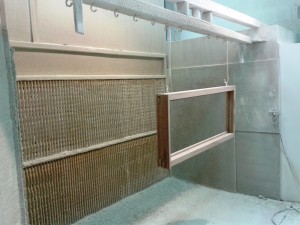 A window casing in the spray booth awaiting paint 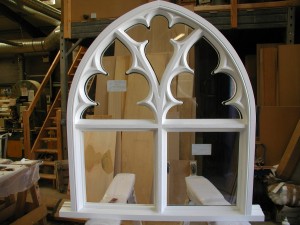 Above and below; finished windows ready to be transported to Combermere 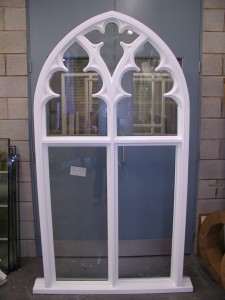 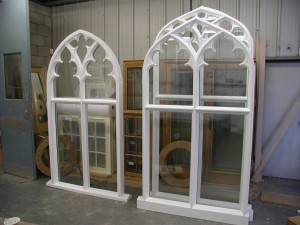 It was one thing for the old window frames to be taken out of the Abbey and be transported to Ruthin so that they could be measured precisely and then reproduced, but with the stair cases the measurements had to be taken in situ, against irregular, curving walls. “We were able to pull apart some parts of the original stairs, but for the rest we designed it as we went along, making sure that it was in keeping with the original in so far we had it”, Meredydd says, “That was true of both the stairs themselves and the hand-rails. When it came to the measurements, top to bottom, to be sure that the treads begin and end at exactly the right point we did cheat a bit; we have a computer programme which works it out for us” – which would have utterly amazed their Tudor forebears (and perhaps lead to accusations of witchcraft).

Many of the original window cases fell apart as the joiners removed them from the building, in which case all the pieces had to be kept in one job lot to be re-assembled in the workshop so that they could be either repaired or completely replaced. In other cases there were salvageable pieces of wood from one window which could be grafted into another. As Meredydd showed me though, they were far from being all the same; they were of course hand-made, so no two were in fact the same dimensions, and the radiuses of the arches within the gothick forms were different.

Once the woodwork was complete the windows were spray-painted in-house. Each received three coats of a ‘breathable’, water-based Teknos paint (made in Britain, near Banbury, in Oxfordshire). The painting takes place in a dedicated spray booth and the items are then moved to an adjoining room where they are hung and dried. When you see the finished job it is immediately apparent that spray-painting gives a far superior finish to brush-painting. These window frames will not need re-painting for at least a generation. 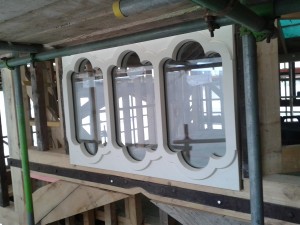 A new window from RM Jones in place in the North Wing – high up on the south-facing return. Note the old iron strap re-used on the new wood below the window

Business, Meredydd says, has been very good for the firm in recent years, even through the recession. They are at the top end of the market, producing mostly bespoke work, and people will always pay for the highest quality work. “The Abbey work has been a big job for us, and very satisfying”, he says. “We delivered some windows yesterday and it was very nice to see them finished and going out of the workshop.”