In the spring of 1919, just four months after the end of World War One, and just ahead of Combermere Abbey being bought and sold for the only time in its history, an auction was held at the Abbey. Conducted by Messrs Henry Manley and Sons Ltd. of Whitchurch and Crewe, it was held over four days, from Wednesday March 19 to Saturday March 22, starting at 11.30am on each occasion. What was for sale was the contents of the Abbey – and not just from the house itself but also from other buildings, such as the stables.

The largest items were sold inside the Abbey, but the vast majority of the lots were displayed and auctioned in a marquee erected on the lawn. The Royal Hotel in Nantwich provided refreshments (at “moderate charge”), and those intending to travel a distance to view and buy were advised that “Whitchurch, London and North West Railway, is the most convenient station; motors will meet morning trains”. 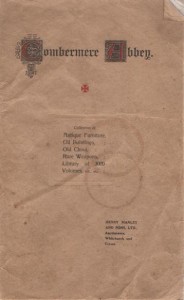 Henry Manley & Sons’ catalogue for the 1919 auction of the contents of Combermere Abbey. Our thanks go to Mrs F Moss of Bunbury who gave us this rare surviving example.

As well as those who came from a distance, large numbers of local people attended – many to spectate and whistle through their teeth, and to view the Abbey’s furniture and furnishings for the first time. Many local people bid for and bought items though; picking up bargains, and buying souvenirs in recognition of the family which had owned ‘the big house’ for the best part of four centuries.

That family was the Cottons, who had been granted Combermere by Henry VIII after the Dissolution of the Monasteries. At that point the Cistercian Abbey, built in remote woodland in 1133, passed from monastic ownership and became the property of Sir George Cotton, courtier to Henry’s illegitimate son, Henry Fitzroy, Duke of Richmond.

The Abbey had been put up for sale in 1893 by the third Viscount Combermere, who seems to have managed to dissipated the huge wealth amassed by the first Viscount – possibly through idle management and extravagance. He was described as leading “a rickety life”. The estate did find a buyer. His successor, the fourth Viscount, could do nothing to restore the estate’s fortunes, and for nineteen years, from 1898, the house was leased to the widowed Duchess of Westminster. It would have been difficult to sell the estate during the War, but once the Armistice was signed no time was lost. Cataloguing the contents must have been a couple of months’ work in itself. 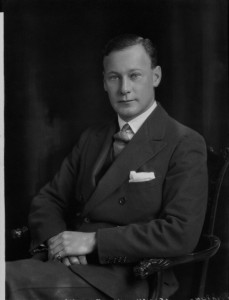 The fourth Viscount Combermere. The last member of the Cotton family to live at Combermere Abbey

The auctioneers had a thousand lots to get through in though four days – plus all of three thousand books. There were more than 140 lots of glassware, fine china, and tableware, with famous manufacturers’ names such as Sevres, Waterford, Crown Derby, Delph and Worcester among them. Many items had been imported, and were hugely fashionable. There were dozens of lots boasting goods brought in from China and Japan. Other exotic items included “A pair of French bronzes, Cavaliers” and an “ancient lead Bhudda temple ornament”. 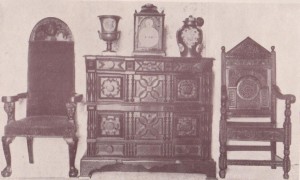 Six separate lots from the auctioneer’s catalogue, in all; the furniture comprises two carved oak armchairs and an oak Jacobean chest, intricately carved.

A lot of the furniture sold was hefty, dark oak, dating back to the Seventeenth century, and again, was of the very highest quality. Lots 155 and 156 were typical; “Elaborately carved five-foot oak chest with inlaid panels, the panelled lid carved with ancient warriors in bold relief” and “Richly carved four-foot six-inch settle with arms, seven carved panels, seat covered in coloured Spanish leather”. There was a lot of very fine French furniture, which stood alongside the work of English master craftsmen such as Sheraton.

The auction catalogue burst with superlatives. Lots were all “handsome”, “beautiful”, and “superior”. Both an oak dining table and a carved oak chair were described as “massive”; the latter being “The Ghost Chair” in which the late Viscount was apparently photographed while his own funeral was taking place some miles away. One wonders who bought that, and where it is now. Delightfully there were two “whatnots” – both of three tiers and made of Rosewood. 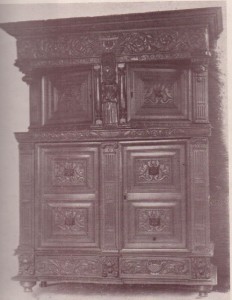 One of two matching carved oak cabinets offered for sale, with a figure carved in high relief on the central column of the upper section.

One of the many paintings sold was a portrait of Elizabeth, Empress of Austria, who had rented the Abbey as a hunting lodge (for the full story of the Empress’s stay click here). Other pictures included – unsurprisingly – a “large engraving of Field Marshal The Duke of Wellington giving orders to his generals” (the first Viscount Combermere was one of those generals; later himself a Field Marshal). There were a considerable number of religious paintings, mainly by Italian artists. Attribution was a problem for the local valuers and they were very cautious; an engraving of Charles I was “after Vandyk” [sic], another was “after Rubens”, one was “attributed to Hogarth”, another oil painting was “of  the Rembrandt school”, while another was “attributed to Nicholas Poussin”. Only one picture carried a famous artist’s name with certainty; a self-portrait by Sir Joshua Reynolds.

As well the inevitable family portraits and military scenes there were many rural and field sports scenes. Many sound charming; “Lake scene with cattle”, “Unkennelling the foxhounds”, and “Royal Hunt in Windsor Park”. In all more than one hundred pictures were sold.

There was a mass of militaria offered for sale – unsurprisingly – including the first Viscount’s “Field Marshal gilt epaulets”. A model cannon was sold, as was an Afghan shield, two Indian battle axes, early English armour, two early ndian cannon – “richly ornamented on carriages, ‘Captured At The Battle Of Bhurtpore 1825” (Combermere’s greatest victory), and any number of swords, sabres, arrows, and native shields.

A “rich brocade and tinsel Indian native costume” was offered for sale. This possibly dated from the first Viscount’s time in India, but who on earth bought it? And why? Who bought the “fifty-inch high soapstone figure of Kwan-Yin”? It’s not hard to understand the appeal of an antique Queen Anne card table, which sounds very fine, or the “Handsome Rosewood French chiffonier, inlaid and mounted with ormolu, fluted pillars, ormolu grille doors, mirror back and marble top”, but who paid – presumably – good money for it, and where is it now? 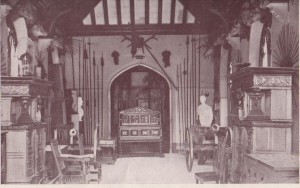 A view of the Armoury Hall (now truncated) used as the frontispiece for the catalogue.

Thursday March 20 started with some cheap lots. A fitted luncheon basket was sold, followed by several walking sticks, a tea urn, a letter box, various racks, and twelve forks. The contents of individual rooms were then sold off. It’s no surprised that the Smoking Room, the Small Dining Room, and the Large Dining Room were filled with fine furniture, but the private rooms of the senior servants were too. The furniture in the Housekeeper’s Room included a couch, an easy chair, and oak dining table which extended to 8’ 6”, a wardrobe made out of Spanish mahogany, a pianoforte in a walnut case, an an “antique Queen Anne walnut cabinet with flap front, enclosing drawers and a chest of drawers under”. Doubtless these were hand-me-downs from elsewhere in the house, but they must have made for a very comfortable parlour. The Steward’s Office also boasted mahogany furniture, plus a satin walnut chest and a comfortable-sounding “oak library chair with round back”.

The contents from all the reception rooms and the fifteen bedrooms were sold, along with everything from the servants bedrooms. Lots 196 to 201 were fifteen brown blankets; lots 792 to 900 were large job lots of “coppers and other cooking utensils, kitchen furniture, table glass, china and earthenware, tea and dinner services, toilet ware, baths, rugs, mats, pictures”.

The Library sounds like a treasure house all on its own. Among the huge number of books was an original edition of the works of Hogarth, half-bound in Moroccan leather. There were hundreds of books on different parts of the world, together with volumes on English political history.

From outside the Abbey itself, saddlery and harnesses, and garden ornaments were all sold. Even a manual fire engine, a ‘station bus’ which carried fourteen people, a circular iron cattle crib, and one hundred and fifty pots of carnations went under the hammer. Even items which one would have expected to stay with the house itself were sold; most notably the once-magnificent gates from the Stone Lodge entrance. They were exported to Long Island in the USA (the full story can be read here).

It’s not at all hard to imagine local people snapping up bargains, which they then carried away proudly – and local farmhouses and cottages were graced with exotic and once-expensive items, the like of which would never have been seen under those roofs before. After the sale – and after a huge number of carts and early motorised vehicles must have been used to carry away the huge number of lots – the Abbey must have been a forlorn and ghostly place. Stripped of its contents and devoid of life for the first time in almost eight hundred years, it was dusty and deserted; footsteps would have echoed from wall to wall, and nothing remained by ghosts and impressions on the floors and walls where rugs, furniture and painting had been removed. 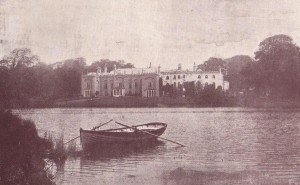 The west face of the Abbey in 1919, seen from the face side of the lake (so looking east). The extreme right hand wing has been reduced in height to a single storey since this photo was taken.

Soon though it was bustling again. Sir Kenneth Crossley moved in later that years, and he and his wife – the American-born Florence Field – invested in new furnishings on what must have been a grand scale. They had four children – Anthony, Fidelia, Ruth and Catherine – ranging in age from six to sixteen, so the rooms and corridors would now have echoed with laughter. Further research is needed to find out how many of the Cotton’s servants were re-employed by the Crossleys, but it seems very likely that a fair number were. Once again the Abbey would have resembled a village, full of people, all with their place and their part. Now though it was a younger and more dynamic household than previously, and together with the hard-won peace Combermere Abbey must have been a joyous place to be as the Twenties dawned. 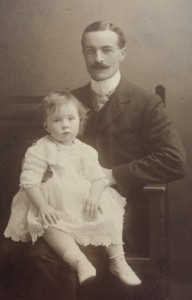 The new owner of Combermere Abbey, and the founder of only the second dynasty to own it; Sir Kenneth Crossley, with his daughter Pamela.

The auctioneers Henry Manley and Sons Ltd. merged with another local firm, Wright & Partners, and became Wright Manley in 1979. In May 2014 they merged again, this time with Marshalls of Knutsford, to become Wright Marshalls. We do not currently know how much was raised at the auction of the Abbey’s contents, but we have asked to Wright Marshall to look through their records, and hopefully we will know more soon.