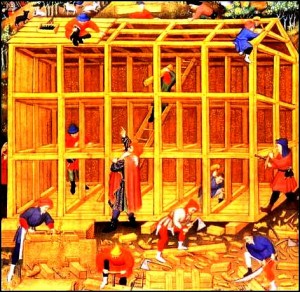 This illustration of the construction of a large medieval timber-framed building shows a mass of workers, but there is one figure of particular interest. He is placed right at the centre of the composition, and he is obviously better dressed than anyone else. He points up to the roof, issuing instructions to a labourer who is working there; there is no doubt about the fact that he is a figure of authority. He is in charge.

At every stage of the Abbey’s development there would have been an unsung hero – one who actually left no mark on the building, but without whom chaos would have reigned. He was the overseer; the man who had the plan of the building in his head, who knew at which point each craft and trade should be on site, who was doing what, and how much it should all be costing.

Nowadays, during the restoration of the North Wing, the overseer has the title of project manager, and he works with a laptop, spreadsheets and a cell phone. His name is Peter Beckett, and he is far from being a hired hand – Combermere Abbey is his home.

Peter’s office during the restoration is a cubby hole in a Portakabin to the north of the building. The walls are covered with plans and delivery notes, and his desk has disappeared under yet more paperwork. Perched on old office chairs and with tradesmen coming and going, I asked him about his role.

“It wasn’t my decision that I should be the project manager”, he said, “It was my wife, Sarah’s. We discussed it and as we were the main contractor it made sense that we had a constant presence on-site. We could keep an eye on what was happening, but most importantly we could make decisions as quickly as possible – so that suppliers, providers and trades weren’t ever held up”.

A fascinating early question was to which point in time the building would be restored. The Abbey has been added to and subtracted from many times over the centuries and its shape and outline plan has evolved considerably. There could have been an argument that the early-Nineteenth century gothicisation should have been stripped away completely, leaving the Tudor half-timbered structure – though so much else has changed that such a notion would never have been practical. “We thought about that for a nano-second”, Peter says, “It was clear though that the timber structure had been cut into and battered about so much during the gothicisation that it made it impossible – plus an extra floor had been created above the Tudor building.”

One replacement which was considered was the Wellington Wing to the north-east, built in something of a hurry for the visit of the first Viscount Combermere’s commander and friend, Lord Wellington in 1820. This would have added considerably to the Abbey’s ground area, and it would have stood parallel to the longer service wing on the south-west. This was soon discounted though on the grounds of cost.

One crucial aspect of the work is of course controlling the money. Every invoice which comes in is logged for approval, and at any point Peter can see immediately how the different sections of the project are looking so far as cost is concerned – and the overall total.

One early task was selecting the suppliers and tradesmen who would work on the restoration. The criteria, Peter says, were, “Reputation, previous experience with this type of work, a good reference – and tendering. The tendering process started with us putting together a specification and getting responses to that. There was no question of giving the work to the cheapest. What was needed was the best job and the best value for money. This is a building of great quality and the work had to be done up to the right standard.

It was useful, Peter added, to talk to as many people in the field as possible and learn from their experiences, good and bad. “We have ended up with the most fantastic team of people here. We came to a working agreement with Grosvenor Construction early on, and Will Mellor, the Director who is responsible for the firm’s work here at Combermere, lined up people to provide advice when we come to a sticky question and feel we are out of our depth.”

The very first port of call was the specialist heritage architects, Arrol Snell; we asked them who we thought we should appoint as the principle contractor (Combermere remains the ‘main contractor’ throughout), and we contacted a number of firms, and finally selected Grosvenor. At every step, no matter the size of the ‘parcels contract’, Peter has organised a ‘beauty parade’ and looked at a number of suppliers or contractors.

Scheduling is a very important factor; goods must arrive on a particular date (and indeed, often at a particular time) and the craftsmen need to be in place to receive those goods and begin to use them. It is not good practise to have too much in the way of building materials on site, and at the Abbey there is neither space nor dry storage for a mass of material anyway. These requirements change frequently, however; jobs take a longer or shorter time to complete, and other factors can come into play. The worst outcome is having workers sitting around waiting for a crucial delivery.

“The project manager’s job is to juggle”, Peter says, “You are juggling people, materials, and different suppliers. Most suppliers deliver on time, but others don’t – which you remember – and sometimes there is a consignment which is simply wrong.

“We can move people around in most cases if a delivery is late, but of course you can’t do everything all at once; some jobs have to be done before others.”

Interestingly, it tends not to be the larger contractors who occasionally let the side down, but the smaller ones – who perhaps have less in the way of resources, but who one would expect to be more conscientious because the work matters more to them. “The bigger they are, the more professional they tend to be, with professional systems in place. They also have greater resources so they can pull people off other, less time-sensitive work, to fulfil an order which is on deadline. On the other hand if a supplier tells us that there is a problem, or the possibility of a problem, and the timing isn’t crucial for us, we can drop that back in the schedule. There has to be some give and take.

“Recently we ordered some stainless steel mesh and it had to be delivered three times because there was, initially, a genuine misunderstanding, and that material was sent back, but the next delivery was galvanised steel – not stainless steel. The third time we got what we wanted, but the delay was frustrating.”

Looking at the North Wing and the ad hoc building site which is sitting temporarily around it, materials such as timber are in evidence – but there are other suppliers to bear in mind – more than one might think. A Tudor overseer didn’t have to factor in electricians or telephone contractors.

“Project management has the same modus operandi no what the project is. What matters is having foresight in terms of anticipating problems, having an overall plan and knowing what you want to achieve. You then break all that down into the constituent steps – and then make sure that you stay one or two steps ahead of your suppliers. You have to review progress on a regular basis, see where you are up to, decide what might need re-scheduling, and see where you stand according to the budget.

“No two projects are the same, but the experience you gain on any one transfers to subsequent projects. You do become more adept at dealing with situations and getting a good feel for all the different elements. The most important element in project management is flexibility. When a problem arises you can’t just freeze; you have to be able to work around it and re-deploy your assets. If it wasn’t something you had anticipated it may cost you more in terms of time or money. No matter how keenly you try to anticipate problems things will go wrong regardless. You can’t think of everything but you have to be able to cope with everything.

“As a Grade I listed building – and one which is on English Heritage’s ‘at risk’ register – we have had their support all the way through. We were sixteen years trying to set up the restoration, and over that time we have developed a very good relationship with their people. With the Combermere estate this is the sixth or seventh project which we have undertaken, so we have built up their trust and confidence in us. That level of respect means, I believe, that they have faith in us.

“Any areas of disagreement with English Heritage were resolved in the planning stages. Early on it was a question of getting their reactions to ideas which we had, discussing the issues, and coming to a decision. We are all looking for pragmatic decisions, using the right materials for the house for the long term – and being as faithful as possible in re-creating the look and feel of the building as it was.”

There is no question but that Peter is in his element in this role, and is enjoying himself; “It is very satisfying to see something being created out of a wreck, and as each week goes past I see visible progress. You could say that it’s like conducting an orchestra, and whether you are playing first violin or just the triangle, everything has to find its place and come in on time.

“It has also been terrific to see what this country can still produce in terms of craftsmanship and the materials we require. You do need to look for the craftsmen, and often if it says ‘restoration’ or ‘historic’ over the door it means they are expensive, but this country does have some very good people still.

“It’s going to be a good, solid building for another two hundred years at least. We are one of the blips in time so far as the history of this house is concerned, and as with every project which Sarah and I have undertaken on the estate over the last two decades, it is like putting pieces into a great big jigsaw puzzle. When each piece has been repaired or restored – or taken away, if that was appropriate – it has helped build the overall picture of a vibrant Combermere estate. This will be one of the big sections, put back in its rightful place.”