When Sir Kenneth Crossley bought the Combermere Abbey estate in 1919 his surname was already on tens of thousands of vehicles throughout Britain, the Empire, and many other corners of the world. In the earliest years of the Twentieth century he had broadened the focus of the engine-manufacturing firm which his father and uncle had created, and had begun making cars, buses, lorries and tractors. During World War One he had aided the war effort by turning his company over to military production and making a range of military vehicles as well as several thousand aircraft.

Crossley cars were noted for the high quality of their construction and their reliability. They were aimed at the higher and of the car-buying market; Sir Kenneth’s original inspiration had been Mercedes-Benz. There had been a lot of co-operation between the two companies, which of course came to an end in 1914 (Sir Kenneth had a very internationalist outlook and collaborated with a number of foreign car makers, including the American firm Willys, and Bugatti in Italy).

In the spring of 2014, 110 years after the first Crossley was produced, a Crossley was once again seen at Combermere Abbey. Sarah Callander Beckett, great grand-daughter of Sir Kenneth and current owner of the Abbey, bought a beautifully restored Crossley 20.9 saloon, dating from 1927, to be used primarily as a ‘going away’ car for weddings held at the Abbey.

In that same year, 1927, almost exactly the same car was given a very definite royal seal of approval.

In March, April and May of ’27 His Royal Highness the Duke of York, second son of King George V, and his wife, Elizabeth, Duchess of York, undertook a tour of two of the most-loved imperial colonies – Australia and New Zealand. Less than a decade later, following the death of his father and the abdication of his elder brother, the Duke was to become King George VI. When the tour was undertaken their daughter – who was left at home, to the Duchess’s anguish – was less than one year old. In 1952 that daughter became Queen Elizabeth II.

In preparation for the tour all of twelve Crossleys were ordered from the Manchester factory. Crossleys were already very popular with the younger members of the royal family. The Duke of York had bought one for himself in June 1926, and his older brother, the Prince of Wales, bought one in the December of that year. 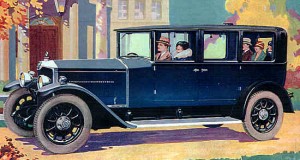 The 1927 Crossley saloon as shown in their press advertisements

For the tour the Crossleys were ordered with the limousine body, which meant that they were around three inches longer than the saloon, and the one in which the Duke and Duchess would travel was a cabriolet (and also had a vertical glass screen behind the driver, which acted as a wind break). The dozen Crossleys would carry the royal party, their entourage, and various local dignitaries in appropriate style. 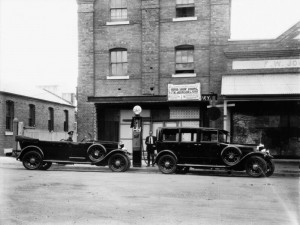 Two of the royal Crossleys – a carbriolet and a limousine – being re-fuelled in Ipswich, Queensland

The visit had a number of purposes. It was not only a tour of an important colony, but the many Anzac soldiers who had died fighting so very courageously during the War were to be honoured, and the Duke was to open the first of parliament of what was now The Commonwealth Of Australia in Canberra on May 9 (as it had become a self-governing country within the Empire).

In an exhausting schedule the Duke and Duchess visited every state in Australia, both islands in New Zealand, and even spent four days in Tasmania. The Director General for the tour said that the Duke had “expressed the wish that when travelling through the States they might have the opportunity of seeing, and of being seen by, the greatest number of the general public”. The Duke specifically said that he wished to meet “returned soldiers, new settlers and school children”.

The visit was a huge success; the royal couple were greeted by a crowd of more than one million people when their ship, the battle cruiser HMS Renown, docked in Sydney of March 26. This was by far the biggest gathering ever seen in the country. On Anzac Day – April 25 – the Duke laid a wreath in front of 25,000 veterans of the war, including twenty nine holders of the Victoria Cross. 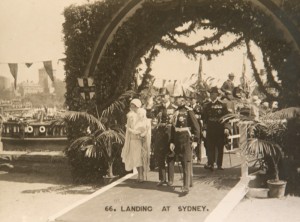 The Duke and Duchess being greeted on their arrival in Australia 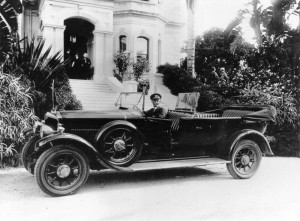 The Duke and Duchess’s personal car, with military driver 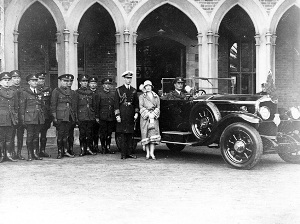 The royal couple with local dignitaries and their Crossley

The Crossleys, needless to say – all fastidiously hand-built by the firm’s very best craftsmen – performed almost faultlessly through the trip. Almost. The cabriolet – of all of them! – with the Duke and Duchess in it did “fail to proceed” (as Rolls Royce would have put it) on one occasion in Sydney – of all places. The motoring press back in Britain reported, “A veritable armada of Crosleys was shipped to Australia for the Duke and Duchess’s tour. They performed well, as usual, but the Duke’s personal car failed in the Australian capital”.

The Duchess fretted for her young daughter throughout the trip but was glad to receive frequent bulletins of her good health from home. George V – who was a stickler for protocol – had given the couple strict instructions regarding how they should behave – and even what they should wear, and when. He updated these strictures by telegram as the tour went on. The King was very irritated by Australian press reports concentrating on what the Duchess had been wearing at each stage; only to be expected now but a new fascination for the press back then. Despite the stiffness for which he was famous, George V was a doting grandparent (as indeed was his wife, Queen Mary). 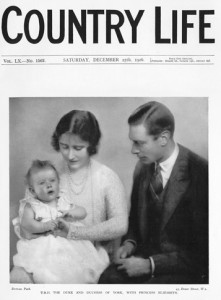 The Duke and Duchess with their daughter, Elizabeth, soon after her birth in 1926

The Duke did of course suffer badly from a stammer, as was seen in the film The King’s Speech. He spoke successfully at the opening of the Parliament, and his speech was described as “very moving”, but later in the visit he did decline to speak in public – on one occasion causing confusion as it was being broadcast live on the wireless.

The British government paid £7,000 towards the cost of the visit, as Australia’s economy was in recession, but it is known that the Duke personally met a considerable amount of expenditure. Sadly we don’t know how much was paid for the Crossleys, or who paid for them, though a Crossley limousine cost around £600. That was a lot of money, but it was half the price of a Rolls Royce.

Before the end of the tour the Duke’s secretary sent a letter personally to Sir Kenneth Crossley, in which he said, “the Duke and Duchess desire me to tell you that the Crossley cars supplied for their use in this country and New Zealand have, in their opinion, performed most satisfactorily”. The one glitch in Sydney seems to have been diplomatically overlooked.

The company re-named the limousine  ‘The Canberra Limousine’ at offered in for sale at the increased price price of £875. It was advertised as “the car of choice for royalty and ambassadors”. The Duke bought a Canberra not long after, to add to the two Crossleys he already owned at that point. The car now at Combermere Abbey is very similar to that car, just being that little bit shorter – all of which is accounted for by less legroom in the back. 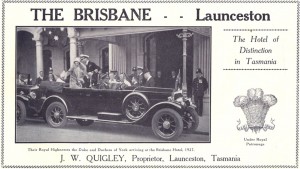 The hotel in Tasmania where the Duke and Duchess stayed used this photo of them in their Crossley to advertise itself, and who can blame them?

There seems to be no record of what happened to the dozen cars sent to Australia and New Zealand. We don’t know whether they were sold off or were brought back to Britain; the former seems more likely. One of them – a maroon and black car – did surface in Australia a few years ago, and in 1976 it was bought by the Australian government for The National Historic Collection, where it is on show today. 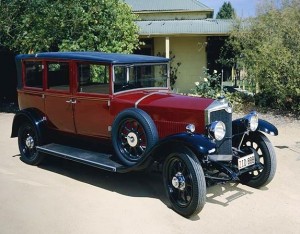 The royal Crossley in the Australian national collection 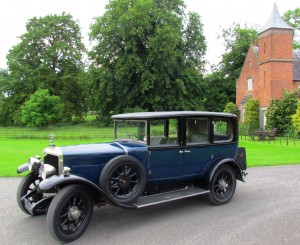