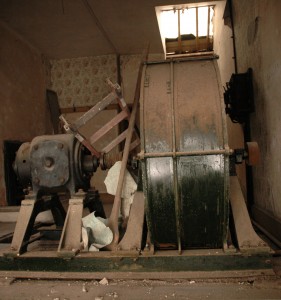 What would you think if you found this contraption in your attic? That’s an electric motor on the left, and some sort of turbine on the right, while on the far right is looks as if there should be a pulley attached to that wheel. On the wall behind it is an early electrical control of some kind. but what on earth is it all for? And when does it date from?

This equipment – mostly made of cast iron and obviously very heavy, was exposed in a small room right at the top of the North Wing after the roof had been taken off – a first step prior to the restoration. The answers to what it is and how old it is are very simple, but believe me, it’s not something you would in find in many homes.

In 1919 Sir Kenneth Crossley commissioned the building of a pipe organ from the Aeolian Organ & Music Company of 841, Broadway, New York City.  The firm had been founded in 1878 by one William B Tremaine, and the company was said to manufacture the best instruments of their kind in the world. They specialised in making organs for domestic use; that is to say, in the main, for use in very large houses, and their clients were the very wealthy.

Aeolian did also made cheaper ‘organettes’ or ‘player pump’ organs, with the wind being forced through the instrument by the organist operating foot pedals – as on a harmonium. And that’s the clue to the use of this apparatus at Combermere. The circular motion generated by the motor, powered the belt, which went down – in effect – two floors, and forced air under pressure into the ‘lungs’ of the organ.  As the required stops were opened, the air rushed through the pipes and sounded the notes. Presumably the pump was at the very top of the house so that the noise of it in operation was not heard below in The Library – and certainly did not impinge on the music being played. As he was an engineer by profession, this must have appealed greatly to Sir Kenneth, and of course it was cutting edge technology. 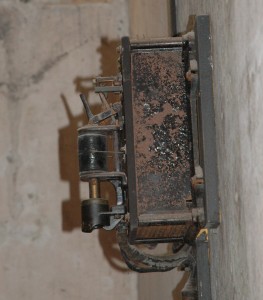 The electrical master control box on the wall by the pump. This would be switched off when the organ was not in use, and would have protected the other electrical items in the house. 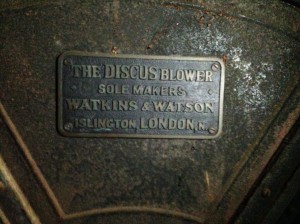 Aeolian – named after the Greek god of the winds – had a sales office in Aeolian House in Bond Street, in Mayfair, and Sir Kenneth may well have seen the organ being played there – and doubtless had a go himself. The sales contract was actually made out in the name of Lady Crossley, and the address for delivery was the family’s previous home, Mobberley Hall, but it was to be delivered to Combermere Abbey and installed against the wall at the north end of The LIbrary. That order – number 1431 – goes into great detail, and tells us that the electric bellows (in the loft room) was a ‘London Supplies Blower’, operated by a 100-watt electrical feed. They also got the address wrong; giving ‘Whitechapel, Salop’ instead of Whitchurch, but that was incidental as the organ was to be delivered to Wrenbury railway station, from where it was presumably collected by local workmen – or even estate workers. The documentation also tells us that the trans-Atlantic shipping route required was to be to ‘Liverpool, Cardiff or Bristol’ whichever was to both cheapest and fastest.

An dark oak case for the organ was requested (which would have fitted in well with the panelling in The Library), as well as a total of sixty six stops and pedals. The organ had no fewer than twenty five ranks of pipes. The date of the initial order was January 28 1919, but the organ did not leave the Aoelian factory in New Jersey until January 27 1921. The family moved to Combermere Abbey in 1919, so perhaps it was originally ordered for Mobberley Hall, but then a decision was made to buy a larger house – made simply because the Abbey came on the market perhaps – and delivery was postponed until the family was settled and there was a place for the instrument. The one thing which we don’t know from the documentation, sadly, was how much it cost. 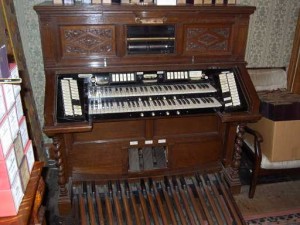 The Combermere organ, with the large aperture to take the ‘automatic play’ cylinder open

The fascinating fact is that you didn’t need to be able to play a single note to get a good tune out of your Aeolian organ. It could be played conventionally, but it also came with a range of pre-formed cylinders which, once slotted into a central cupboard in the vertical face of the machine – one by one, one piece of music at a time – would play the organ automatically, like a pianola. A bit of a con really! It was described in a contemporary press advert as “An instrument upon which anyone entirely ignorant of music can play anything without the slightest practise”.  A con, or a blessing for those of us who learned nothing despite years of piano lessons? 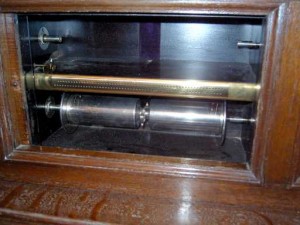 A close-up of a cylinder in position 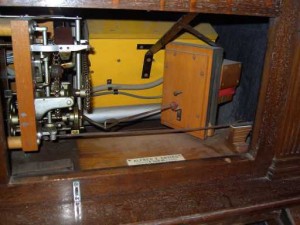 And the same aperture without a cylinder

We know that Aeolian made around a thousand of these larger organs between 1894 and 1932, and perhaps as many as a hundred were installed in homes in Britain. Very few survive; probably only three where they were originally positioned. The Combermere organ was sold back to the company at some point – we don’t know when – and was then refurbished and sold to Arthur Chilton-King, who had founded the Chiltonian biscuit company, and it was installed at his home in Croydon. It seems that in the 1908s it found its way to Exeter, after perhaps twenty years in storage, and it is now at the home of musician and composer Rowland Lee in Lincolnshire. 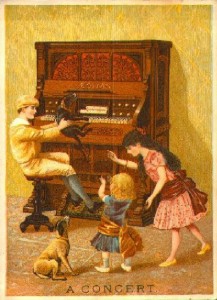 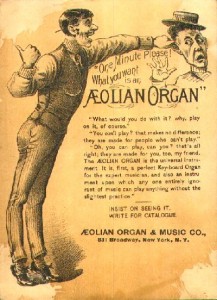 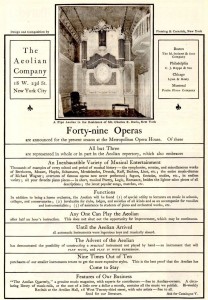 Aeolian Organ Company adverts from different periods, and for different sizes of instrument