During the Eighteenth century life in country houses became markedly more civilised, and many changes improving conditions of all kinds began to be seen in the way that the houses were ordered. One was the appearance of detached game larders, which moved freshly killed food, destined for the table, away from where the family and servants lived and worked.

Once it was killed and disembowelled, game was stored in the larder until it was required, obviously, but also so that it could mature. The meat in question ranged from deer to game birds of all kinds, and rabbits and hares. The game larders were purpose-built to exclude vermin, and to stay cool. Their floors were raised from the ground, and they were securely fitted with fine mesh or gauze over the windows, and with close-fitting doors. The game larders often had over-hanging eaves to give shade, and were positioned so that they were not in direct sunlight. They were usually fitted out with stone or slate floors, and all horizontal surfaces were stone or even marble to help retain the lowest possible temperature; meat was often prepared in the larder as well as stored there. They were carefully fitted out so that the game was raised well above floor level (this kept the meat safe from the house’s cats and dogs, as well as from vermin).

Game larders were usually single storey; octagonal ones, as at Combermere, were not rare. Rather more rare is the hexagonal larder at Farnborough Hall in Warwickshire, which is an early example, dating from around 1750. Both Abbotsford House in Selkirkshire and Holkham Hall in Norfolk have circular game larders – the one at Abbotsford is a sham castle, and the one at Holkham is lined in alabaster.

Larders were usually built of stone or brick, though a few were wooden (as at Audley End House in Essex). Most were functional in appearance, while others – such as at Uppark in Sussex – were quite decorative. 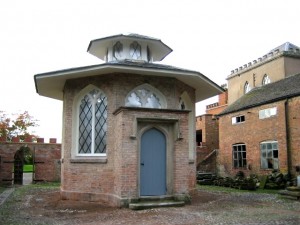 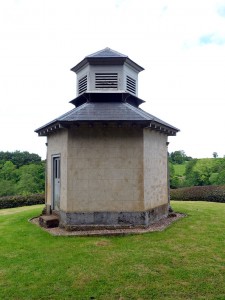 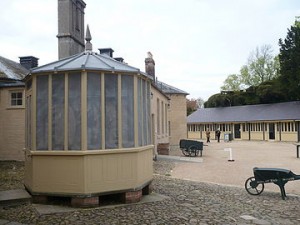 The curious octagonal game larder at Audley End House in Essex – made of wood (note the brick piers keeping it off the ground, to avoid rot and help keep out rodents). 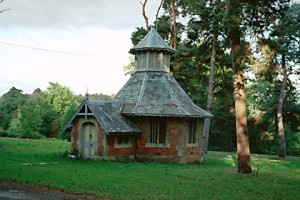 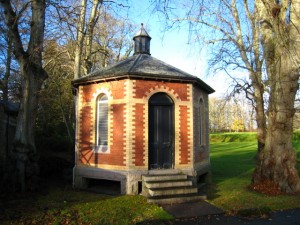 The petite octagonal game larder at Haddo House in Aberdeenshire 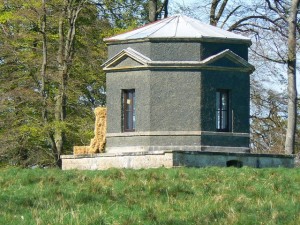 Another smaller octagonal game larder; this time at Tottenham House in Wiltshire 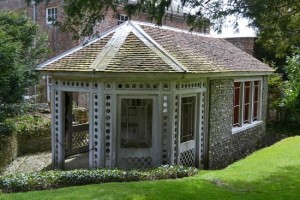 Above and below; the very pretty and ornate game larder (with a half-octagonal end) at Uppark in Sussex. Surprisingly the floor of the larder is not raised from the surrounding ground level 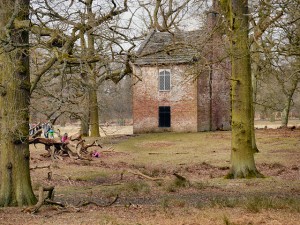 Across the county from Combermere, at Dunham Massey is north east Cheshire, deer were slaughtered in the lower of the larder’s two storeys, and then hung to mature above

Combermere Abbey’s game larder is now, after restoration, a very handsome structure, some fifteen feet across internally. On each face it has large, pointed gothic windows, in the manner of the Abbey itself. It is accessed through a double-door porch on the east side. The lower roof has wide eaves, and above that there is a cupola or lantern – also octagonal – again with lights, and topped with a smaller, deeply-eaved roof (neither roof was ever fitted with gutters). It is built of local Cheshire brick with a slate roof.

We do not know the exact date of the building, but it is thought to date from the reign of King William IV. It is attributed to the Irish architects Sir Richard and William Vitruvius Morrison (father and son). We know that the then-owner of the Abbey, the first Viscount Combermere, commissioned a design for a complete re-modelling of the Abbey from the Morrisons in 1829. It was never undertaken, but they did design The Stone Lodge – which stands at what is now the main entrance to the Abbey – so it is entirely possible that the game larder was their work. Viscount Combermere had gothicised the Abbey a few years earlier, so the gothic design of the game larder was entirely appropriate – indeed, anything else would doubtless have been utterly unacceptable to the Morrisons client.

The larder is located at the western end of a long, relatively narrow cobbled courtyard, which sits to the south of the house, with a long range of brick-built service rooms on each side. The larder is protected from the westerly light by a wall just a few paces away. It is Grade II* listed in itself, independently of the Abbey (which is Grade I listed). Its description in the English Heritage listing is as follows:

“Game larder. Early C19. Probably by Morrison. Whitewashed stretcher bond brick with a slate roof with lead flashings and a timber lantern to the apex of the roof. Single storey. Octagonal body with rectangular porch to the eastern face. Eastern face: central porch with 4-centered doorway to the centre with a stone surround and a Tudor hood mould above. Stone plinth, common to whole building and cyma moulded cornice with lead roof. Above this and to either side are a series of 2-light cusped headed windows, that above the porch being of less depth. Similar windows to all the faces with diamond patterned lattices of iron rods. Deep eaves. The lantern openings take the form of rectangular lights with trefoil heads and cills.” 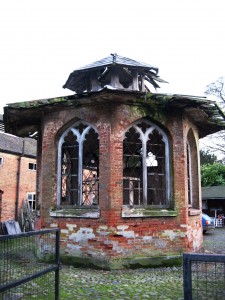 The Combermere game larder in a very sorry state before restoration 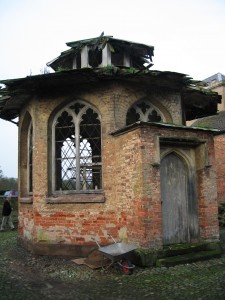 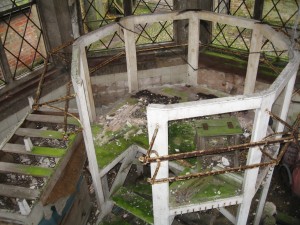 The wooden platform at the centre of the larder, from which larger game such as deer was hung on the higher hooks. The hooks on the rails around the platform itself were for rabbits, hares, and birds such as pigeon, pheasant and partridge 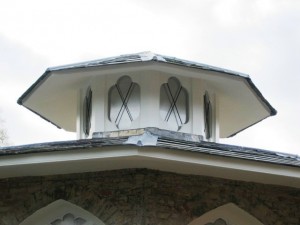 Above and below; the restored lantern or cupola, with its stretched quatrefoil windows and heavy-eaved roof 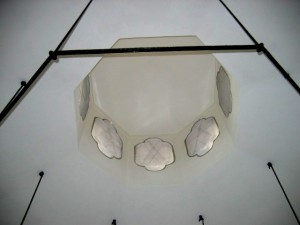 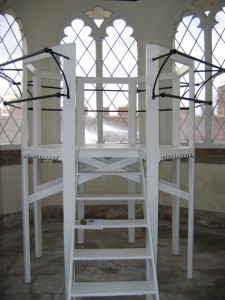 The restored timber platform inside the Combermere game larder, with the original iron rails and hooks on which smaller game was hung 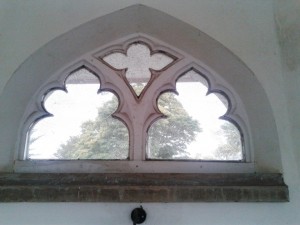 The abbreviated gothic window over the door, seen from the inside 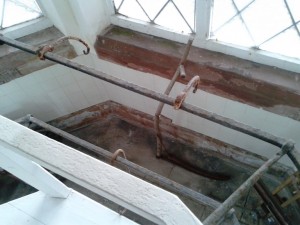 Original ironwork, treated against further decay during the restoration, and the now-repaired window cills

In their 1995 survey of the Abbey and its associated buildings, the architects Arrol and Snell of Shrewsbury, described the game larder as “one of the most handsome of its kind”. The larder was obviously structurally unchanged from its original design, which was splendid.

They noted that the larder’s brickwork was in fairly good condition in general, though in some areas it had suffered as a result of rain and frost. Of greater concern at that point were the two roofs. The original slates had been of “very high quality” but the flashings were now missing for the most part, and many slates had moved. This had allowed rainwater to enter the building, and the rafters, lathes, plasterwork and fittings inside had suffered badly as a result.

The window frames needed extensive repair, unsurprisingly, and the original zinc mesh over the openings had largely disappeared. The small porch on the eastern face was found to be in fairly good repair, as was the stone steps leading to the entrance, and the door frame.

Inside the larder a lot of plastering was missing, but it was thought that this could be fairly easily replaced – and with a lime plaster as originally used. The stone-flagged floor was good, and just a small number of the tiles which formed the dado below the windows needing replacement.

All the ironwork – the rails and hooks (with they described, a little pompously, with the Italian expression ‘ferramenta’) – was present and repairable.

The game larder was restored thanks to a very generous – and enormously welcome – grant from The Country Houses Foundation, which covered the complete cost of the work. When completed in 2007 it was used as a visitor centre.

In their newsletter of Autumn 2008, The Country Houses Foundation said:

“One building that stood out in particular [at Combermere Abbey] was the unusual and distinctive octagonal Game Larder. With large gothic windows and original hanging stands inside, it had fallen into serious disrepair, with the roof structure weakened through loss of tiles and rotten timbers.

“Its prominent position in the centre of the service courtyard made its restoration a high priority and the Country Houses Foundation provided for this with a grant of £50,000.

“Work began on the Game Larder in the autumn of 2007 and was completed on time and within budget by the end of November. The plan is for the building to be used as an interpretation room where visitors can learn more about the historical background to this important historic site.” 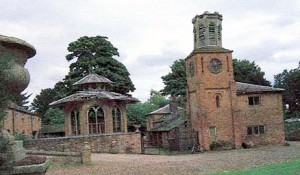 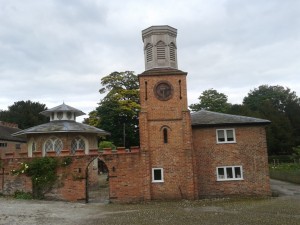