On the edge of the woods, behind Combermere Abbey’s Walled Garden, sits a very curious brick construction. The rather eccentric brickwork is obviously modern, but it frames an entrance, with much older stone steps – which lead down into the earth. The roof of the passage is barrel-vaulted, well built in local brick, and a few yards in a broader, circular structure can be seen – going down deep into the ground. This is the Abbey’s ice house, and though we don’t know when it was constructed, we certainly know why – and how it served its purpose. 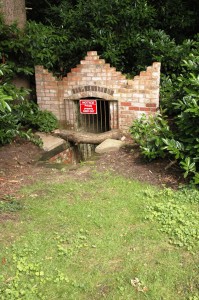 The entrance to the Combermere Abbey ice house

In this country and in this form ice houses date back to 1619. The first Stuart king of England, James I, ordered the building of the first ice house in England – at Greenwich. There had been ‘ice pits’ previously, but they were crude constructions and were far less sophisticated – and efficient – than brick-built ice houses.

The Greenwich ice house. Still in use when this illustration was made in 1722.

King James had another ice house built at Hampton Court Palace between 1625 and 1626. This one was huge; a circular, brick-lined structure thirty feet deep and sixteen feet in diameter, almost completely subterranean, and covered with a thatched roof. This design, with modifications, set the standard for the next two hundred and fifty years.

King Charles II was the next monarch to commission the building of an ice house in this country. His was built in 1660 in what was then Upper St James’s Park and is now Green Park. Charles was fascinated by science, and also enjoyed his food, so it brought together two passions.

Their popularity really took off in the next century, especially when gentlemen and aristocrats returned from The Grand Tour with an enthusiasm for ice creams and other culinary delicacies which needed to be chilled during their manufacture. Ice houses became very popular indeed, both on country estates like Combermere, and in the gardens of urban villas. Over the years very many have been dismantled or filled in – for obvious safety reasons – though some of those remaining were used as (rather chilly) air raid shelters during the Second World War.

Ice houses were, understandably, built in shaded or naturally cool areas. Sometimes they were underneath other buildings, or they were built into north-facing ha-has. Most seem to have been built in woodland, as at Combermere.

They varied in design, but the basic form comprised a narrow corridor, usually built in brick, descending under the ground level. At the end it usually met a low (often stone) lip, against which barrows could be halted, and then there was a square or circular pit, at least ten feet deep, and again brick-lined. The roof was often made up of a brick sphere, or could more simply be capped off with stone. The floor tapered to a grid, which allowed melted water to seep into a sump, and then drain away. 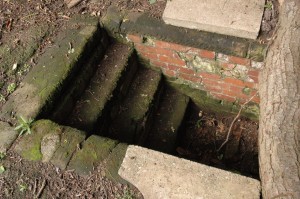 Stone steps lead down into the ice house 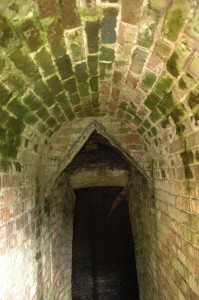 The entrance passage is narrow and low, to keep the cool air in, and well-made in Cheshire brick 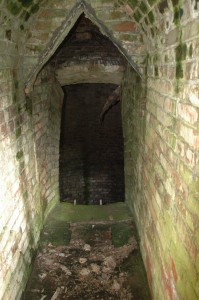 The passageway leads to the circular chamber which is sunk into the earth. The brickwork is as good as you would see on a house.

Ice wasn’t made in ice houses; it was stored there. It was made by nature – in the usual way, during cold weather. On harsh winter days pond ice and snow would be harvested by garden staff, and shovelled into the ice house. The insulation properties of the structure were so good that a surprisingly large amount would still be there by the following summer – and, sometimes, the summer after that. The snow and ice was used for cooling purposes; either for chilling wine, cooling kitchen containers prior to cooking, or in the dishes themselves. Another culinary trick brought back from the Mediterranean countries was the use of snow and ice for preserving foods – long before the electric refrigerator.

As well as harvesting and preserving it locally, ice was brought into the country by ship from colder climates. Needless to say, rather a lot of the ice melted during transportation, though not as much as one might think. Ice was greatly prized in India during the Raj, and the British ruling class were happy to pay for it. Ships brought ice all the way from North America and Canada, and the merchants worked on a rule of thumb that half of the ice loaded would still be frozen by the time it was unloaded in India.

Ice shipped into England tended to come from Norway. Quite how the sailors coped with the melted ice I don’t know. Presumably it was bailed out as they went. Ice was certainly imported into London and Bristol by sea, and rapidly transported to ice houses within those cities. However, away from the ports transporting such a bulky and heavy cargo across land, and on very poor roads, must have been a tedious and expensive business. With the coming of the railways – broadly speaking from the 1840s onwards – ice could be distributed around the country far more quickly, and was carried in specially-adapted, insulated boxvans (ice was also used to keep food fresh when it was moved by rail; carcasses were hung from iron rails fitted to the roof, over a bed of ice).

The popularity of ice houses was linked to adventurous fashions in cooking, and in particular fabulous confections. Confectionary chefs were usually French or Italian and were very highly paid. They stood apart from the hierarchy of kitchen staff and only answered to the lady of the house. They operated in their own kitchens, away from the heat of the main kitchens, for practical reasons – but this allowed them to create their own fiefdoms, where sometimes only their native language was spoken, the better to set themselves apart from the other servants. The confectionery kitchens often had windows on a south-facing wall as good light was needed for the sculpting of elaborate dishes.

These specialist cooks made blancmanges, jellies, aspics and bombes, ice creams and sugar-based dishes of all descriptions, sizes and flavours – created to impress with both their extravagance as well as their taste.

Pyramids of confections, from a specialist French cookery book, all of which required ice for their creation

In the mid-Eighteenth century landscape gardeners often incorporated an ice house into their designs. The eighteen foot-deep ice house built by Lancelot ‘Capability’ Brown at Croom park – the Earl of Coventry’s country estate near Pershore – can still be seen today.

The ice house at Syon Park, by the Thames near Brentford, is another survivor. The one which can be seen nowadays was the second on the same site. Demand for ice from the kitchen was such that the earlier ice house was enlarged in 1820, with two separate chambers and double doors to aid insulation. Servants transported the ice to the confectionery chefs in huge zinc-lined wooden chests. 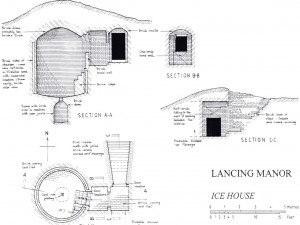 Many country houses have legends of secret passages associated with them, and some architectural historians have suggested that the enigmatic entrances to ice houses – their original purpose long forgotten – may have been the source of this mythology.

Sadly, as I say, we don’t know when the ice house at the Abbey was built. The lake would probably have provided more than enough ice every winter, but when it was needed it would have been quite a trek to transport it to the kitchens – getting on for half a mile.

A house such as Combermere would certainly have been grand enough to warrant one. Guests to the Abbey could not have failed to have been impressed by the dishes which could be created with the use of ice – especially in high summer. And if you were served the finest confections during your meal at least you had the comfort of knowing that you were considered to be worth impressing!

We can assume that the Combermere ice house was in place during the stay of the Empress of Austria in 1881 and 1882, and although she ate very sparingly so as to preserve her tiny waist, she might have toyed with delightful flavoured ices and served other confections to her guests. If the ice house was sixty years or more older, it seems highly likely that the first Viscount Combermere would have had his cooks serve the very best and most elaborate confections to his very august guest, the Duke of Wellington. So much effort was expended preparing for the Duke’s visit, including the building of a whole new wing on the Abbey, complete with a ballroom, that if there wasn’t an ice hour before, the one we see today might well have been built specifically for his brief stay.

Nowadays, of course, we just reach into the ‘fridge – in houses grand and not so grand alike – without any thought for how it works. It’s far more convenient, but somehow nothing like as romantic as the winter’s ice, preserved in a specially-built house, and barrowed down to the kitchen by strong lads.

Please note that the ice house is dangerous – even the steps leading into it are very worn and slippery. If you are a visitor to the Abbey do not attempt to go in it. Thank you.