The weather has continued to be very kind to the restoration of the North Wing at Combermere abbey. Even though the entire Wing is covered in a temporary ‘tent’, bad weather would make conditions on the ground very difficult. As it is there have been no interruptions to the proceedings, and the team has had a very good autumn. 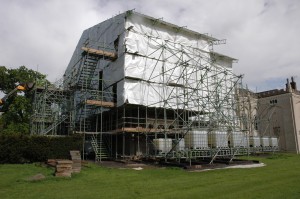 The bare earth on the ground floor is now covered (as you can see in the photo below), and is ready for the installations of high-efficiency underfloor heating. A small section of what may be medieval stone flooring was discovered, and has been chronicled, but that aside there were no exciting discoveries. 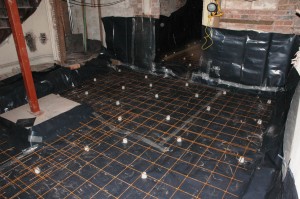 The story throughout the rest of the North Wing is of more new timber going in. As we’ve seen in earlier posts, a lot of rotten, original wood has had to be removed, and the joiners have cut new pieces to replace them. And  replicated them beautifully, it must be said. Some of the larger pieces have been bolted into position with very chunky, steel fasteners, but in most areas the new wood is held in place with wooden pegs, just as it would have been hundreds of years ago. It’s a simple and efficient method, and it worked well in Tudor times and it works equally well nowadays.

The photographs below show the new roof structure at the most easterly corner of the Wing, and how the new joinery mates to the Sixteenth century timber-work. As noted before, the very handsome, fluted chimney was taken down as far as was necessary and has now been rebuilt with new, local bricks, exactly in its original profile.

The modern, bright yellow, joiners’ bench saw would have stunned the men who worked in wood at the Abbey five hundred years ago. They did everything ‘the hard way’, as we see it nowadays. 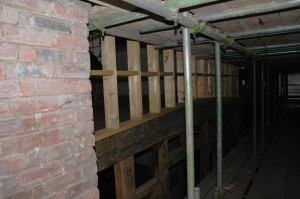 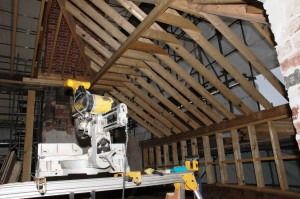 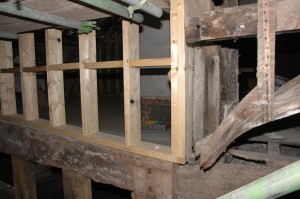 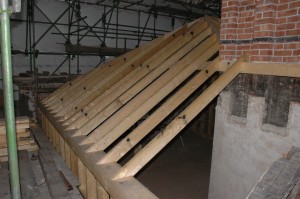 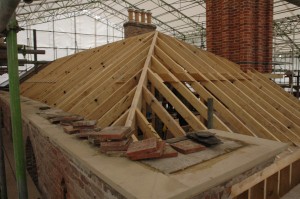 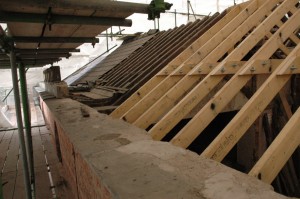 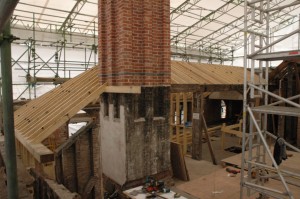 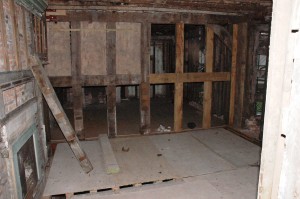 More brickwork has gone into place, and on external walls the original gothick arrow slits have been replicated, as the photo below shows. 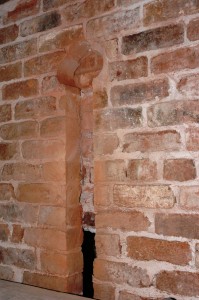 Some meteorologists are forecasting a severe winter, which will be no fun for the workers, but we can only wait and see. Certainly though that is when the tent will earn its keep.

When Combermere Abbey’s owner, Sarah Callander Beckett, was creating the wedding venue from the Walled Garden, with the Edwardian Glasshouse at its north end, she commissioned a table-top metal model of the whole area – partly to see what it would look like, and partly for fun. It was made for her by TimeCast of Kendal Road in Shrewsbury, who make models of all kinds but specialise in architecture in miniature. It was created to a scale of 1:220. 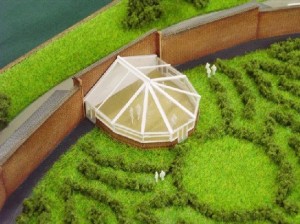 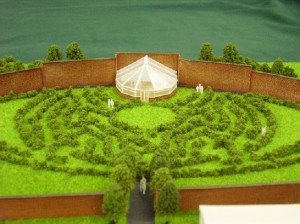 What you see the Glasshouse as it is now, with the two wings – which were beyond restoration – removed. The fruit tree maze is also in place. There are three modern pavilions shown, but one, larger one was eventually built. The model was rather forgotten as the years passed, but it has now been re-discovered. It’s interesting to compare the model with a very recent aerial photograph (drone having made aerial photography affordable since it was made), which shows just how accurate it is. 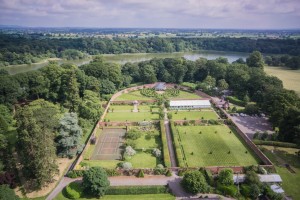 The model is in excellent condition and will now be displayed. It will be particularly useful for brides-to-be to envisage the scale of the gardens and get a feel for how they look in their entirety. 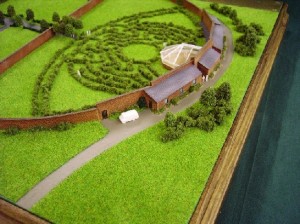 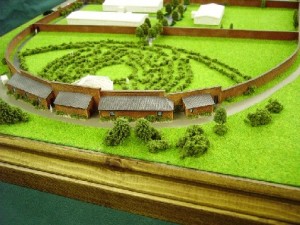 A selection of shots from the short visit by Orbital Pictures to Combermere Abbey, showing the restoration project  of the North wing starting to get underway

Two fascinating finds made at Combermere Abbey shine a light on the fears and superstitions of our ancestors.

During the restoration of the Abbey’s ‘at risk’ North Wing workers found a woman’s shoe and a large horse-shoe placed carefully under the floorboards. It is well-known that horse-shoes were installed in houses for good luck, but the use of a shoe – always just one, and usually a woman’s or child’s shoe – is less well-known. Shoes were believed to both ward off evil spirits such as witches and devils, and aid child-bearing among the women of the household. 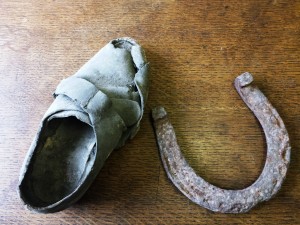 The ‘Concealed Shoes Index’ at Northampton Museum (Northampton being historically the centre of shoe manufacturing in England) has almost two thousand examples of shoes hidden in historic houses from all over Europe, North America and even Australia. They were hidden in chimneys, in walls, or under floorboards. As well as being either women’s or children’s shoes, they also tend to be well-worn; the assumption being that a well-worn shoe was imbued with the spirit of its wearer. Only very rarely are pairs found.

The Combermere Abbey shoe fits this template exactly. It is for a left foot, had seen a lot of use before it was concealed, and the sole has been repaired at least once, with old, hand-made iron nails. It is also larger than an average lady’s shoe nowadays; and in modern terms would have been a size 8. It is made of leather, and is missing a buckle.

A Fourteenth century English mystic, John Schorn, was said to have caught a devil in a woman’s shoe and thereby been able to cast it out of a house. Thereafter a woman’s shoe was often built into a house. If one couldn’t be included in the structure in some way it was common to leave an old shoe by a hearth, to protect from devils coming down the chimney.

The technical term for this is an ‘apotropaic charm’, which is reputed to have the ability to protect against harm or evil. The only known ‘apotropaic’ shoe dates from around 1500. After the Dissolution of the Monasteries in the 1530s, Combermere Abbey was re-built as a private house by Richard Cotton in the 1560s. 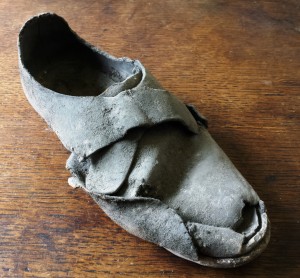 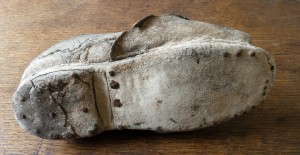 Ladies’ shoes were also fertility symbols. A woman wishing to conceive would borrow and wear the shoes of a woman who had recently given birth, in the belief that this would ensure conception. The old nursery rhyme about the old lady who lived in a shoe, and “had so many children, she didn’t know what to do”, reflects the connection between shoes and fecundity – as does the custom of throwing shoes behind brides on their wedding day (whereas in an Arab country that would be the ultimate gesture of disrespect!).

The horse-shoe found under the floor in the Abbey is very large, hand-made in iron, and would have originally been forged for a heavy horse such as a shire. Perhaps its size made it all the more effective; At 6.5 inches wide (165 mm) it is an inch wider than the largest of the ready-made farriers’ horse-shoes available today. A horse-shoe is a familiar good luck talisman, and in Christianity is associated with Saint Dunstan (909 – 998), Abbot of Glastonbury and Archbishop of Canterbury. According to ‘The True Legend of St. Dunstan and the Devil’ he nailed a horseshoe to the Devil’s hoof when he was asked to re-shoe the Devil’s horse. This caused the Devil great pain, and Dunstan only agreed to remove the shoe and release the Devil after the demon promised never to enter a place where a horseshoe is over the door. 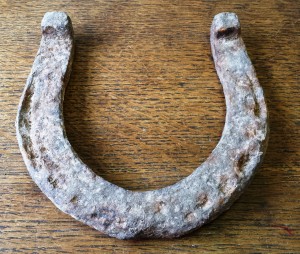 It might be thought that superstition was for the impressionable members of the lower ranks, but the re-built Abbey was the home of wealthy and well-connected members of the gentry. It is possible that builders put the shoe and the horse-shoe into the building as a matter of course, but they would surely not have done so if it would have been at odds with their employer’s thinking and beliefs. The talismans may or may not have been placed under the floor-boards at Richard Cotton’s specific instruction, but it is likely that he would have known and approved.

Perhaps we can indulge ourselves and say that there is an argument that the charms worked. The Cotton family held Combermere for almost four hundred years, and suffered no major catastrophes. The house and the family survived religious reformation and The English Civil War, and one Cotton from the Abbey – the first Viscount Combermere – became a national hero. The Abbey was visited by a King, an Empress, England’s most famous diarist, and a man who was a military hero, a Duke and a prime minister. Perhaps it needed all that good luck to survive the second half of the Twentieth century, when so many large country houses succumbed to decay, taxation, and the ravages of the modern world.

So far as the fecundity associated with the shoe is concerned, that certainly seems to have worked. Richard himself fathered thirteen children by his two wives, and six subsequent Cotton wives at Combermere Abbey managed to give both to all of sixty children between them.

We now know more about the shoe found under the floor during the restoration of the North Wing at Combermere Abbey.

We sent photos of the shoe to Rebecca Shawcross, the splendidly-titled Shoe Resources Officer at Northampton Museums and Art Gallery. The Museum has documented several hundred examples of ‘concealed shoes’, as explained above, and has about one hundred of them in their collection.

Rebecca’s expert opinion on the Combermere shoe is fascinating: she says,   “The shoe is actually a man’s example. The low stacked heel strongly supports this. It is a ‘buckle latchet’ style, so the buckle would have been attached to the two latchets. The more wealthy you were, the more expensive your buckles, but everyone wore them; even the lower classes could satisfy their desire for buckles made from cheaper materials available, owing to advances in manufacturing techniques.

“Date-wise I would say it’s from the 1780s or thereabouts. It is a great example of a concealed shoe, being very well worn, patched and repaired, though intact enough to remain very much a shoe”.

We are very grateful for Rebecca’s assistance, and are fascinated that we have one of the unusual examples of a man’s shoe – rather than a woman’s or a child’s – as our concealed shoe. 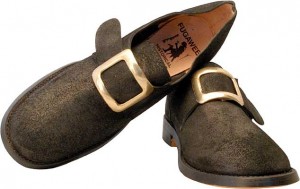 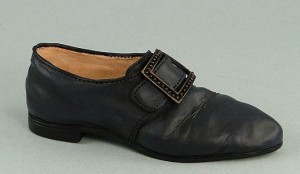 A replica of a shoe worn by George Washington in the 1770s and/or 1780s, which is of a similar shape and has a similar buckle and strap arrangement to the Combermere shoe