Specialist paint conservators Hare & Humphreys have started work in Combermere Abbey’s most important and historic room, The Library, which was the pre-Dissolution Abbot’s Lodging. You can find more about the firm by going to www.combermere-restoration.co.uk/latest-news/. There is more on this site about The Library, its history, and recent restoration work; go to www.combermere-restoration.co.uk/category/library/.

They have a very substantial job to tackle; the cartouches on which the many Cotton coats of arms are painted are made of wood, and have been bolted through the plaster to beams behind. The arms themselves seem to have been painted on to paper which has been applied to the wood, but elsewhere there is evidence of canvas. Each element has to be stabilised separately. As you can see in these photos, the plaster needs repair, and in several places the paper is coming away from the wood (it is most likely that the heraldic arms were painted off-site, and pasted onto the wooden cartouches). Interestingly, one coat of arms on the window side of the room is slightly skew-wiff, but there is no sign that it has slipped. It must have been put up badly and never been corrected. 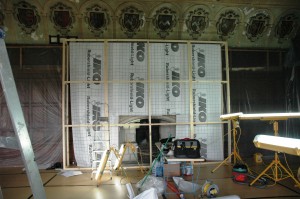 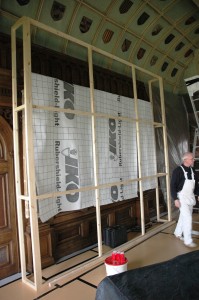 The first stage is almost complete, which is to securely panel off the rest of the room to avoid accidental damage during the conservation. Plywood covers the floor and all the joins are taped, and battening has been fixed so that the covering can sit clear of the walls. This is the second time in recent months that the fireplace in this room has been boxed off; a temporary ‘shed’ was erected round it to protect the rest of the room while the chimney was being repaired, and now it is being boxed in for its own protection. 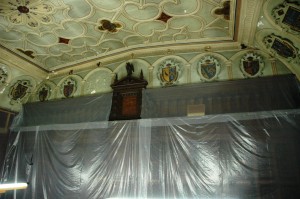 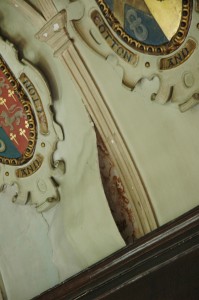 Once the plaster, wood and paper/canvas has been made secure the painting can begin. The colours will be mixed to be an exact match for the originals. The work will be undertaken it two phases; the first lasting some five weeks, then everything will be left for a fortnight, and then there will be a finishing-off period of another two weeks. All that will take us to about the end of March, and we are hugely looking forward to the finished room. It is going to be utterly glorious – and just as it was when the first Viscount Combermere commissioned it.

Work will begin on the restoration of the ceiling of The Library very soon, and Combermere Abbey is very pleased to announce that the work will be carried out by Hare & Humphreys, who describe themselves as “Britain’s leading company specialising in the interior decoration, conservation and restoration of historic buildings”.

To quote them at even greater length, they “provide decorating and restoration services, paint analysis, colour consultancy and exacting project management, together with an in-house team of dedicated art, craft and trade experts advising and using modern and traditional materials and techniques as appropriate”.

The Library is the grandest and most fascinating room in Combermere Abbey, and has been so for half a millennium. It was created within the existing Cistercian Abbey during the reign of Henry VII as The Abbot’s Lodging. It was the size you see today, and recent researches have shown that there was a baldacchino – a raised dais with an elevated canopy – under which the Abbot would be seated in splendour. 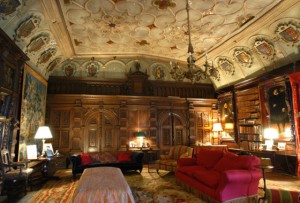 The roof of the Abbot’s Lodging had – and still has – a glorious medieval hammerbeam roof (the age of which will be identified using dendrochronology very soon) made of local oak, which was later obscured by a plaster ceiling with coving. The Viscount Combermere added the twenty two heraldic shields, all relating to his family, in the 1830s. It is the plaster ceiling and the armourial shields which Hare & Humphrey’s will be working early in 2014.

The company was founded by Peter Hare & Paul Humphreys in 1987, and they have worked on many of Britain’s greatest historic buildings and structures, including Windsor Castle, Hampton Court Palace, Saint Paul’s Cathedral, Burlington House (home to The Royal Academy), Dover Castle, and the 202 foot-high monument to The Great Fire of London at the north end of London Bridge. You may recall that Windsor Castle – which is the oldest and largest occupied castle in the world and has been inhabited continuously for a thousand years – suffered terrible damage in 1992 as a result of a fire. Hare & Humphrey’s work on the restoration was rewarded with a Royal Warrant from Her Majesty the Queen.

Working two hundred feet up on The Monument, and creating a trompe l’oeil effect in a private house in London

More recently the company worked on the nation’s gift of the Royal Barge Gloriana, which led the Thames River Pageant in June, to mark Queen Elizabeth II’s Diamond Jubilee. You can read more about this work by clicking here and going to the firm’s website.

The royal barge Gloriana, built for the Queen’s diamond jubilee

At Combermere they will very carefully take paint samples, analyse them in laboratory conditions, and restore and re-paint to bring the surfaces back to their original glory. It will be terrific to welcome Hare & Humphrey’s to the Abbey, and watch their progress. Every brush stroke (well, nearly) will be recorded for this archive, and updates will appear here regularly.