I’ve been lucky enough to know renowned British interior designer Nina Campbell for over 30 years, having first met her in New York in the early eighties. In fact, our friendship dates back to my time as Head of PR in the USA for Laura Ashley, and I have been using her fabrics for over 20 years in a number of rooms here at Combermere Abbey.

I was thrilled to be able to recently announce that Nina has joined the restoration team to redesign the North Wing when fully restored, alongside other family areas such as Porters Hall on the main private side of the abbey.

When I inherited Combermere all those years ago, we collaborated together on the decoration concept for one of our most popular holiday cottages – Crossley. Using her wonderful ‘Asticou’ collection inspired by a garden in Maine, we celebrated three generations of Crossley women gardeners. 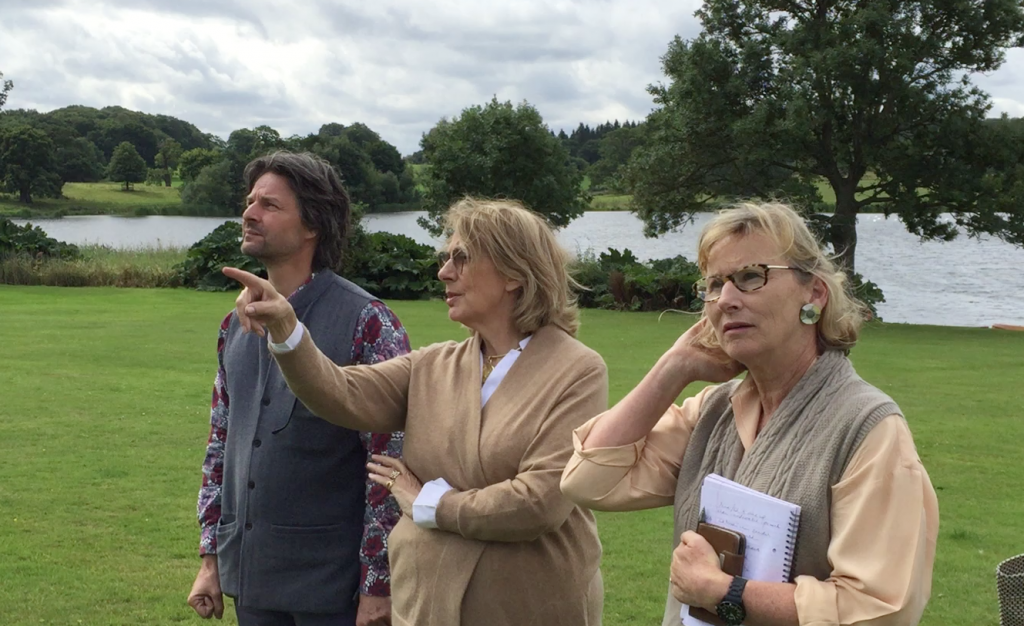 I asked Nina to work with me again because I love her sense of humour (which certainly comes in handy during the trials and tribulations of an extensive restoration project) and sense of style. She understands the rich architectural heritage of Combermere Abbey with the vision to introduce some contemporary ideas – bringing its history up to date and creating the perfect atmosphere – the strong sense of a welcoming family home.

When we sat down to look at the design considerations for the North Wing, it was important to make it very flexible – so that it could be used as an extension to the main house, but work very well on its own – allowing our guests their independence and privacy.  It gives us so many possibilities and will be so warm, elegant and well insulated that I am sure it will be used for dinners and entertaining when events are happening in the main house or available for special friends of Combermere throughout the year.

Nina has already put together a series of mood boards to give an indication of how she would like to address the strong gothic elements of the abbey while integrating a contemporary feel, with a touch of glamour. Nina knows I’m not afraid of colour, and we’ve chosen a palette that references different historical influences whilst playfully reflecting the unique character of our family. We are all very excited!

Private owners of the Combermere estate, Sarah Callendar Beckett and her husband Peter, have chosen the ‘green’ interior designer who describes himself as a ‘Colourman’ in the 18th Century sense of the word ­– mastering both the art and science of colour – to help complete the project.

Sarah Callendar Beckett explains why she chose Edward Bulmer’s range of paints and expertise: “Whilst we’re compelled to ensure the North Wing is restored to Grade I Listed standards, we’re also very keen to bring the Abbey into the 21st Century and make sure that it’s an environmentally-friendly project.

“Edward Bulmer is renowned for his keen eye for colour and an encyclopaedic knowledge of historic paints and interiors, so his breathable ‘Pots of Paint’ range is the ideal choice for the colour scheme of Combermere Abbey’s North Wing. The fact that only natural pigments and ingredients, such as plant resins and beeswax, are used appeals not only because they are more eco-friendly but also because historically the Abbey would have been decorated with natural mediums, simply because synthetics paints didn’t exist! We can’t wait to see the final result.”

Edward, who has been central to the redecoration of many of Britain’s most historic properties, including Althorp and Goodwood House, added: “It’s a privilege to work on Combermere Abbey. It’s a remarkable building and I’m so pleased to be helping bring it back to its former glory. Using authentic paints will give the North Wing a new lease of life but remain sympathetic to its history.”

The North Wing Restoration is due to be completed in April 2016. For more information about the restoration project visit http://www.combermere-restoration.co.uk/.

15 December 2015 It was the week before Christmas, and festivities are in full swing at Combermere Abbey, as an eventful year in the abbey’s restoration phase comes to a close.

Plasterers, painters and workmen took a break from their decorating duties to get suitably festive and take stock of how far the abbey has come before it opens it’s newly refurbished doors to the public in April 2016.

Sarah Callander Beckett and her family have been driving the restoration project since she inherited the 900 year-old abbey in 1992. Sarah said: “We’ve been working round the clock this year to get the abbey restored to its former glory and it’s been a labour of love by all involved.

“We’ve had our set-backs, from the terribly wet weather that has delayed the exterior painting project using specialist Keim paints, developed for historic buildings, to unforeseen structural issues with timber framing. However, we’re on track to start our exciting new venture as we look to diversify further to the public with exquisite bridal accommodation, opening in April 2016.

“To mark Christmas, and welcome our holiday guests staying with us, each cottage is decorated, as well as lighting up key trees around the cottages and walled gardens. We even have one cottage still available due to a last minute cancellation. Each cottage has a special Christmas Hampers full of local delicacies – Cheshire cheese, port, and chocolates and the Radio Times! .”

For more information about this historic restoration project, visit http://www.combermere-restoration.co.uk/ 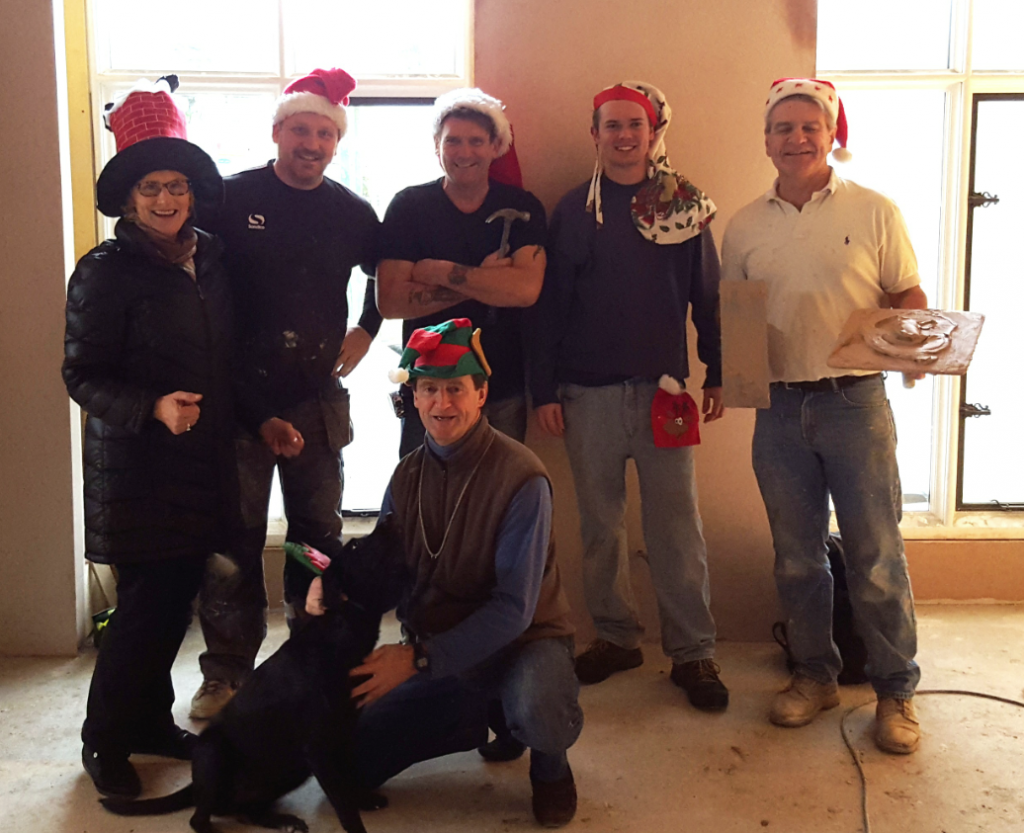 Since commencing the North Wing restoration project in 2014 we’ve made some fascinating discoveries, which have helped to peel back the layers of time at Combermere Abbey. With more than 900 years of history to unravel we’ve discovered a variety of items and pieces of the historical puzzle from a range of eras. From a thirteenth century papal bull to a marker stone inside the walls of the Abbey itself to deliberately concealed household items, we’ve found out some of the Abbey’s most interesting secrets.

One of the oldest and luckiest finds was a Papal bull in perfect condition made of clay which was uncovered by our local metal detecting club by chance as it was buried beneath a piece of lead. Papal bulls were used to seal documents from the Vatican. Pope Innocent IV, who became Pope in 1243 and died in 1254, attached this particular papal bull to a notification sent by Combermere Abbey. We’ve spent many an hour wondering what may have been in that letter to the Abbot…

Another fascinating discovery during the restoration of a shoe and a large horse-shoe, hidden beneath the floorboards, sheds light on the superstitions and fears of the period. It’s likely that both were concealed within the build of the Abbey after it became a private residence as good luck charms. We all know that horse-shoes are commonly associated with good luck, and we’ve since learnt that during this period shoes were believed to both bring about fertility as well as ward off evil spirits. Traditionally it was a woman’s shoe that would have been buried, however we were surprised to find out that it’s actually a man’s shoe dating from the 1780s. Nevertheless it seems it worked a treat still as Richard Cotton, who was the owner at that time, fathered thirteen children!

One of my personal favourite finds is what we call the ‘power stone’ – it’s a marker stone, which indicates the point at which two strong ley lines (hypothetical alignments of a number of places of geographical or historical interest) meet. Again it shines a light on ancient beliefs (some say superstitions!), that these meeting of ley lines created a strong spiritual force. Originally the, marker stone would have been outside the walls of the Abbey itself but the extension of the North Wing must have swallowed it up! So it’s fascinating to think that without this project it would never have been uncovered!

Whilst my main aim is to restore the North Wing to its former glory the various discoveries of artefacts and historical parts of the building have been undeniably intriguing, which has also led me to explore the history of the abbey even further by employing an archivist to delve into the depths of Combermere’s ancestry and tales.

Visit http://www.combermere-restoration.co.uk/ for the full story on the history of Combermere Abbey and the restoration project.