If you go into a modern DIY shop and look for the longest nails they have in stock you will be lucky if you discover any more than six inches in length. Carpenters working at Combermere Abbey hundreds of years ago were able to do a lot better than that though; during the restoration of the North Wing our Twenty-first century joiners have found two handmade nails no less than fourteen inches long. 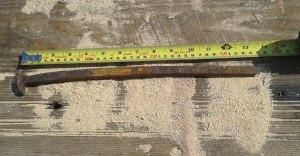 The old nail alongside a thoroughly modern tape measure

It is impossible to say exactly when they date from but they were holding together two pieces of oak which are almost certainly Tudor, and date from the time of the construction of Richard Cotton’s grand new house in the 1560s. The nails could be from later work on the same wood, but it is not unreasonable to assume that they date from then.

The nails are made of iron, and have a ‘chisel’ tip rather than a single, sharp point. This was presumably so that they did not split the wood; they would have been hammered in with the line of the point parallel to the grain. The modern Abbey joiners say that it is almost certain that a guide hole would have bored into the timber first.

The nail we were looking at had distorted slightly, possibly as the weight of the timbers settled, and there is a little surface oxidisation, but not much. Once it was tightly inside the wood there would have been neither moisture nor air to cause rusting. The tip had curled round at its very end, as if it had encountered something solid at the very end of its progress. One flange on the head had distorted as it was removed.

To find out more about the nail we took it to Matthew Hallett, a blacksmith working in the village of Bunbury, not far from Combermere. Matthew suggested making an exact replica, albeit in steel rather than iron, which took him moments. Working with ‘a lad’, a smith could have a very large number of nails, of whatever size, in a working day. 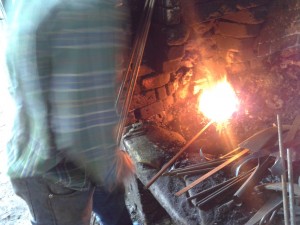 A smithy might well have been set up at the Abbey; there’s certainly a suggestion from later material that there was a carpenter’s workshop near the house, and a smithy in the service yard of a country house was far from rare. In many cases timbers were fastened with wooden pegs, but the creation of the Tudor house would have required a large number of nails as well, along with many other wrought iron items. A blacksmith would also have served as a farrier, and made and mended a huge range of tools and implements for the household and other servants – working in other metals as well as iron, such as tin and pewter.

Creating the nail’s tip was straight forward, and took only a few beats of a hammer. Making the head took a little longer. Matthew put the heated steel rod into his vice, but quickly pointed out that in fact the head would have been created with the red-hot metal held in a hole in the anvil. He made the head domed by hitting it from both sides, and he thinks that its counter-sunk appearance was deliberate, and the shape would have stopped fabric catching on its edges. It is possible that the head of the nail was originally left exposed, like the studs on a studded door of the period. 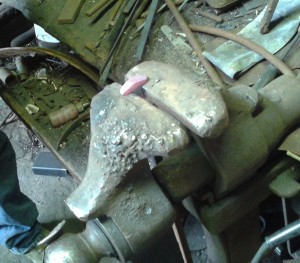 Forming the head of the nail in the vice 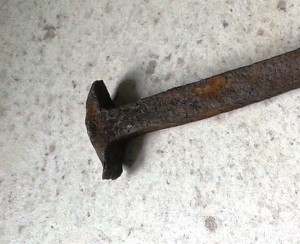 The slightly deformed head, done as it was being extracted from the timber

Looking at a large timber-framed house one thinks of joiners, of course, but not necessarily of smiths, but during the periods of major construction at the Abbey – in the Twelfth century when the Abbey was first built, during the secular rebuilding in the mid-Sixteenth, and when the house was gothicised in the early Nineteenth – there would have been a broad range of crafts and trades on site. In addition, the workmen had to be clothed, fed and accommodated. The site would have been as large as the average village of each era, at the very least; bustling and noisy, with workers of all kinds, overseers, horses and dogs filling the landscape. Work which can be done with heavy lifting equipment, internal combustion engines and electric motors today would have required human muscle, and would have taken far longer. Quiet, peaceful and tranquil – as the Abbey is on so many lovely occasions nowadays – it most certainly was not. 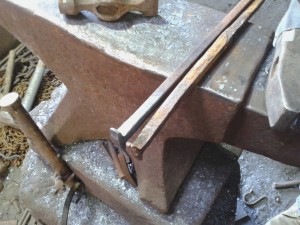 The modern nail on the left and the older one on the right, on Matthew’s anvil