Two weeks on from the last update on the work of the conservation team on the ceiling of The Library, and it all looks very different. The layers of paint have been almost completely removed from the coving and the ceiling itself, and the original early-Seventeenth century top coat is revealed.

This yellowy-white covering is fibrous and lime-based, and has to stay in place. Trying to remove it would break up the plasterwork mouldings. It’s a good foundation coat though, over which a match for the original pale green top coat can be applied.

The larger heraldic shields, all showing arms relating to the Cotton family over the centuries (accurate or not – we shall see), have been freed from the wall so that the timber grain-effect paper – which had itself been painted over – can be cleaned and made good enough to take new paint. 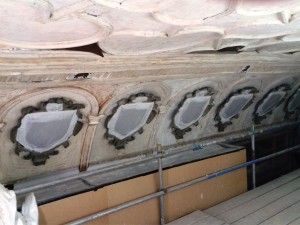 The larger heraldic shields on the early 17th-century coving.

Close examination of these shields reveal an interesting fact about their construction. They look as if they have been individually carved, but they are in fact made up of two separate elements. Each has a flat, profile-cut background, on to which a moulded or pressed wood-composite material has been applied to create the three-dimensional curved sections. This is simple mass production, and will have saved time and money. The panels of inverted ‘U’s between the crests on the higher frieze will also have been pre-made sections, plastered into place.

These heraldic shields were probably commissioned by the first Viscount Combermere in the early Nineteenth century, and no matter how grand he was, he was obviously not averse to taking a few short cuts to save a few pounds. It will be fascinating to consult heraldic experts and see how accurate the coats of arms are; in at least one case a shield have been over-painted at least twice, perhaps as new research contradicted earlier assumptions.

Each shield is held in place with two bolts (their heads concealed by plaster moulding). Several shields have split to a greater or lesser degree in a horizontal line between the bolts, perhaps when they were first secured, or as a result of movement. One shield has been taken off the wall completely and it will be weighed. 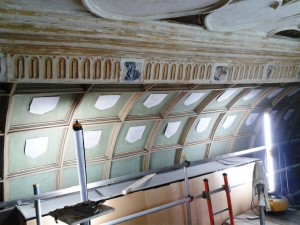 The smaller and less elaborate shields on the north wall are also still masked off, as are the crests of local families on the frieze above. The plyboard box at the bottom of the image is protection for pictures still on the lower part of the hall. The floor to ceiling height here is in excess of twenty feet. 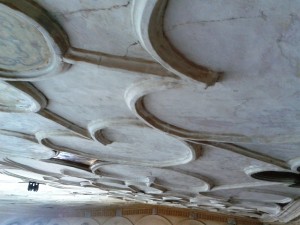 A close-up shot of a central portion of the ceiling.The pulley wheels on the bottom left corner are for the central light fitting. New, discreet lighting will be added to the coving to illuminate the coats of arms. The considerable distortion in the ceiling can be seen as it slopes downwards into the corner on the bottom right of this photograph.

After stripping, the material on the ceiling almost looks like marble. There are numerous cracks in the plaster, and any which have have needed it have been filled in. The plaster is in good repair in fact, and no sections need replacing wholesale. Areas of decoration, such as the cartouche in the top left corner, are still masked off. These will be re-painted individually with carefully matched colours from a historic paint palette.

The paintwork will take place over the next three weeks, and the entire job will then be left to stabilise and dry for a fortnight before work resumes.