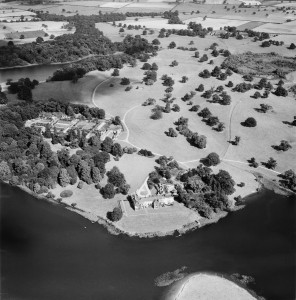 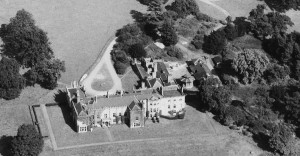 Here we have half a dozen absolutely fascinating photos of the Abbey, all taken from the air, between 1948 and 1952. And what a lot they tell us; the Glasshouse still has its curved wings, the Walled Garden looks as if every inch is under cultivation (unsurprisingly, as some rationing was still in force in 1948, and if you could grow your own food you certainly did), the Wellington dining room is still standing, the south wing is still three storeys high. Seeing the Abbey from the air also emphasises the point, which many visitors do not always realise, that the house stands on a promontory, with the mere stretching two-thirds of the way round it – and that is how huge a one hundred and fifty acre lake really is!

We have been able to see these images for the first time thanks to the establishment of a hugely impressive online resource; and the story behind it is as fascinating and it was visionary.

There are often, it must be admitted, beneficial side-effects of warfare. Terrible though the First World War was, it did bring huge advances in many kinds of medical treatment – of necessity, one might say, but advances none the less. Another positive side-effect was quickly realised by historians and archaeologists. As more people took to the air than ever before strange lumps and bumps on the ground were often noticed. They were also able to look down on towns and cities and see these areas with a clarity and an understanding which you didn’t get from a map alone.

The fliers might have been in their aircraft for military reasons, but they were quick-witted and imaginative enough to realise that they had an unparalleled opportunity to further historical knowledge.

Two young men who realised that they could add to the sum of knowledge of this country and create a pioneering business for themselves were Francis Wills and Claude Graham-White. Francis had been an aerial observer in the Royal Naval Air Service during the war, so he had been well trained in looking at the world around him from a great height and interpreting what he saw. Claude was an early aviator, who had made the first night-time flight as early as 1910 – and what courage that must have taken.

They went into business together in 1919, offering a novel commercial proposition – aerial photography. They were based at the London Flying School at Stag Lane, Edgware, at first renting just one room for their office, and a bathroom which served as their darkroom. They acquired a large (46 foot wingspan) Airco DH9 bi-plane capable of 123 mph and with a ceiling of almost 17,000 feet, which had been designed as a bomber for the RAF. They hired the aero-adventurer Alan Cobham to pilot it for them.

Alan was a remarkable man. Born in 1894, Alan flew with the Royal Flying Corps and its successor the Royal Air Force throughout the First World War. He then became a test pilot for De Havilland, and in 1921 undertook a 5,000 mile tour of Europe; flying between seventeen cities in three weeks. He was knighted in 1926 for his services for the aeronautical industry, having flown from England to Australia in 1926. He died in 1973, just shy of his eightieth birthday.

The new company, Aerofilms, offered their services for mapping and surveying, and also undertook filming for the fledgling British film industry – largely for documentaries and news reports. They also had a worthwhile side-line in selling aerial prints to postcard manufacturers, which provided understandably popular. Their earliest photos were of the nearby Hendon aerodrome, but in 1920 they started making flights over south coast seaside towns and photographing the coastline, the promenades, and their compatriots at play.

This was a very commercial business idea, and the firm prospered and grew. From 1925 Aerofilms relocated its base to the aerodrome at Hendon. They prospered through the Twenties and Thirties, but in 1940 were brought into the war effort. With its years of experience, Aerofilms became the foundation of the Allied Photographic Interpretation Unit, based at Danesfield House near Medmenham in Buckinghamshire. The RAF describe the Unit as “specialising in photographic intelligence, and the home of the RAF Intelligence Branch. During the Second World War, RAF Medmenham was the main interpretation centre for photographic reconnaissance operations in the European and Mediterranean theatres”.

While it was still a crucial part of the war effort the shipping and aviation entrepreneur Sir Percy Hunting bought Aerofilms, and after the war the company’s activities extended even further, thanks to the breadth of the Hunting group’s reach. Aerofilms was re-named Hunting Surveys Ltd, and with the purchase of two smaller companies – AeroPictorial and Airviews – a huge library of historic aerial photography from across the UK was catalogued and made available. The resource totalled 1.26 million negatives by the mid-Nineties, organised into 2,000 photograph albums. These have been the basis for a number of books, focussing on seaside piers, the British coastline and football grounds. The title sequence of the television programme Eastenders uses Aerofilms images.

Now, thanks to assistance from English Heritage and The National Lottery Fund, 85,000 photographs from Aerofilms’ archive has been published online in a dedicated website; Britain From Above. It is a fascinating library, showing how the cities, towns, countryside and coast of this country have changed over almost a century. Nowadays we take this sort of information for granted, given that we can call up satellite mapping at the click of a button, but it is both great fun for us civilians, and hugely useful for academics, to be able to contrast ‘then’ and ‘now’. Certainly we at Combermere Abbey are absolutely delighted to have found the website and been able to see the Abbey as it was sixty feet years ago – and from a bird’s-eye view. 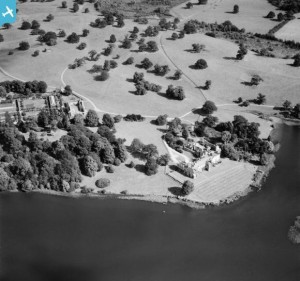 The Abbey from the north-west, with the gardens to the left of frame. We currently only have small versions of all these photos but we are going to contact Britain From The Air to see if we can acquire higher resolution images. 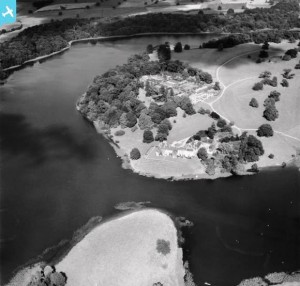 From the west, giving some idea of the size of the mere 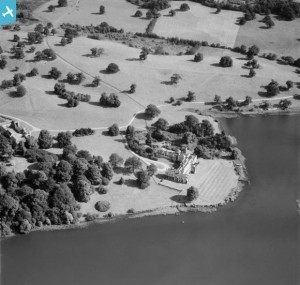 From north-north-west, showing the now-demolished Wellington dining room on the left hand side of the wing of the Abbey nearest to the viewer 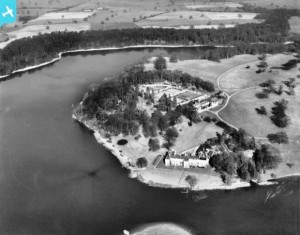 From the west again, showing the west range as three storeys. It was reduced to two in the Seventies. Also note the extent of the walled gardens behind the stable block. 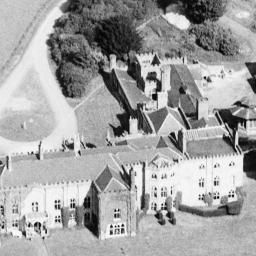 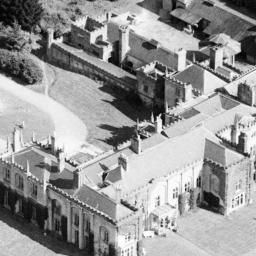 Detail shots showing, on the left, the full-height west wing, and on the right, the Wellington dining room behind the north wing. This wing is currently the subject of the restoration.

The Walled Garden isn’t lawn and flower beds as it is now; it seems to be given over entirely for horticulture. 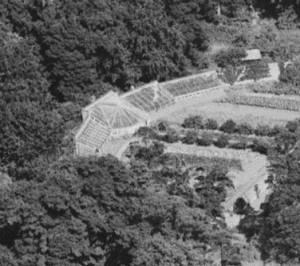 The Glasshouse in The Walled Garden still has its slightly-angled wings to left and right. Only the central section now remains, but it has been professionally restored.