Humans have always had something of a macabre fascination with Xestobium rufovillosum – and that’s hardly surprising. The sound made by the death watch beetle has been imagined to be a harbinger of death for centuries. Its macabre reputation seems to have come from the tapping or ticking sound it makes, which can be heard (usually in the rafters) of old buildings on quiet summer nights. It is indeed a somewhat spooky sound, and the belief is that a death in the house is imminent. 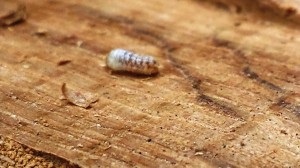 A variation on the folklore is that the sound was usually heard by anxious relatives and friends who were sitting quietly by the bed of someone dangerously ill, usually at night. Hence they were observing a ‘death watch’. 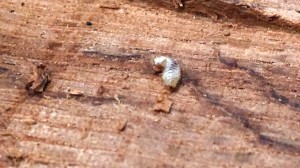 Well, there hasn’t been a death at Combermere Abbey for many years, we’re glad to say, but the death watch beetles have certainly been busy. The beetles eat their way through wood, which they are able to digest using a combination of enzymes in the alimentary canal. They like wood which has already experienced fungal decay of some kind. The adult death watch beetle is only a quarter of an inch long but the damage it can do is remarkable. The Abbey beetles have certainly digested quite remarkable amounts of timber, as you can see in the picture below. 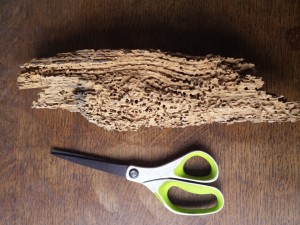 Thanks to the mythology surrounding the death watch beetles have been mentioned by writers as diverse as John Keats, Edgar Allen Poe and Ray Bradbury.

These photos of all-too-active, happily munching, death watch beetles larva were taken in the North Wing this week, and I think we can assume that beetles you see here came to a rather sticky end just after being photographed. You can hear the sound they make (at your own risk) by clicking here.